‘Everybody was running away.’ Ukrainians in Kharkiv villages describe Russia’s retreat

Not even the messaging was left to chance. Ahead of the first counteroffensive launched in the south on August 29th, public communications were carefully crafted to lay the groundwork for the second Ukrainian military campaign in the east, which began last week.
Authorities have denied journalists access to the frontlines and only certain images posted on social media by Ukrainian soldiers are allowed to be published.
The result: an impression that Ukraine is effortlessly pushing Russian forces back from territory they’ve controlled for more than six months.
The truth, inevitably for a war zone, is far less clear-cut.
CNN was given exclusive access to the town of Kupiansk in the Kharkiv region, just a day after pictures emerged showing soldiers hoisting the Ukrainian flag on the roof of the town’s municipal building.
Far from being a town under full Ukrainian control, CNN found one still being bitterly fought for.
At the edge of the town, Vasyl — who declined to give his last name for security reasons — tells us that for days “they (the Russians) were shelling and shelling” in the ongoing fight in Kharkiv.
On Sunday afternoon, the dull thud of outcoming artillery fire was punctuated by the more infrequent boom of incoming fire. Russian forces were still fighting for Kupiansk, a town that is crucial to their supply lines, connecting their military base across the northern border in Russia’s Belgorod to Ukraine’s eastern Donetsk region and the frontlines of the Donbas.
Ukraine’s top military commander General Valeriy Zaluzhnyi claimed Sunday that the country’s military had retaken more than 3,000 square kilometers (around 1,158 square miles) of territory since the beginning of the month, much of that believed to be in the Kharkiv region.
But on the ground, the fate of Kupiansk appears far from certain, indicating that maintaining Ukrainian control over newly liberated territory in the area could prove difficult.
Further west, some villages have seen calm entirely restored such as in the Kharkiv region’s Zaliznychne, liberated last week, as the eastern counteroffensive picked up speed. There, the fight appears to have been far less painful.
“I didn’t even expect it would be so fast”, says 66-year-old Oleksandr Verbytsky, who witnessed the Russians retreating. “I went to the store and when I came back, everybody was running away. The Russians drove through the cemetery to get away. Can you imagine?”
Near Zaliznychne, Ukrainian investigators had arrived, alerted to the possible evidence of a war crime. After the horrors discovered north of Kyiv — such as in Bucha — last April when Russian troops retreated after just a month-long occupation, Ukrainian authorities know all too well what to look for. 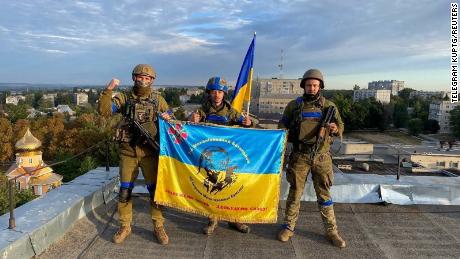 War crime investigators were among the group of officials who arrived at a rundown house to hear from Maria, who had to bury her neighbor and his friend last February, just days after Russia crossed the Ukrainian border.
“I noticed the door had been ajar for days,” says Maria Grygorova. “And when I checked whether they were alive or maybe injured, I saw they were cold and then noticed two holes in Konstantin’s forehead.”
Locals in Zaliznychne describe the occupation as “terrifying” and though a sense of normalcy has returned, the fear of Russian troops coming back still hangs in the air. Serhii Bolvinov, head of Kharkiv region Police Investigative Department who said they are recording apparent war crimes “in almost every village.”
“You never knew what the Russians were thinking,” Verbytsky says. “I made sure never to speak to them because I knew they could hit me so when they walked past me, I just turned away.”

Days from from Brazil election, Lula leads in polls

Ian is one of the strongest hurricanes to ever hit US mainland. Here are some stronger ones.