Forget the Forecasts, the U.S. is Already In a Recession… Here’s How to Profit From It!

The U.S. is in recession. A recession is not coming, it’s already here.

I know it. You know it. Just look around you.

Yes, restaurants and airports are packed… but demand for both dining out and travel are pent up after two years of lockdowns. These parts of the economy don’t represent real demand. They represent people desperate to return to some semblance of normalcy… and burning through their savings/ racking up credit card debt to do so.

Everything else is imploding and has been for months.

Walmart is the largest retailer in the U.S. In many ways it is the U.S. economy, as it is both the largest private employer and larger retailer. What does this chart tell you?

How about Amazon (AMZN), the largest online retailer, and the company everyone thought was indestructible even during periods of economic weakness? What’s it doing?

See also  Kyle Bass: Fed Will Start Cutting In 2023 After US Enters Recession Later This Year 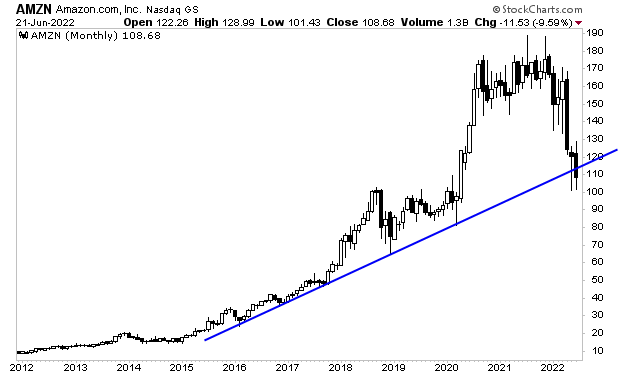 Again, the U.S. is already in recession. The people trying to predict it in the future are ignoring the clear and obvious signs right in front of them… that the recession has already arrived and has been here for some time.

Some 75% of GDP is consumer spending. But if consumers can’t even afford basic items like gasoline or food (let alone rent), then NO ONE is going to be buying much of anything else.

These are the TWO big investment themes today… a recession and hot inflation. And those investors who play them correctly stand to make literal fortunes.

On that note, we just published a Special Investment Report concerning FIVE secret investments you can use to make inflation pay you as it rips through the financial system in the months ahead.

See also  Recession? What Recessio WH Press Secretary Claims the US is Now Entering a Period of “Stable and Steady Growth” – (VIDEO)

NOAA triples its weather modeling capabilities with two supercomputers built by General Dynamics at a cost of $505M, each operating at a speed of 12.1 petaflops