Last Monday, Microsoft declared that DirectStorage would usher in “a new era of fast load times and detailed worlds in PC games.” And while that now seems a little too grandiose, the developer of upcoming tech showcase game Forspoken now claims that one-second load times are legitimately in reach.

Speaking at a GDC 2022 presentation about the tech embedded in the PC version of the game, Luminous Productions technical director Teppei Ono says that the Square Enix title will actually load some scenes in one second flat, provided your Windows 11 PC has a NVMe SSD capable of over 5,000MB/sec reads.

That one-second load time is not the case for every scene, and he didn’t actually show us any scenes load in that amount of time — instead, we saw cutscene and gameplay examples where Forspoken took 1.9 seconds, 1.7 seconds, and 2.2 seconds to get us there, thanks to the way DirectStorage offloads the streaming of graphical assets from the CPU to the GPU. 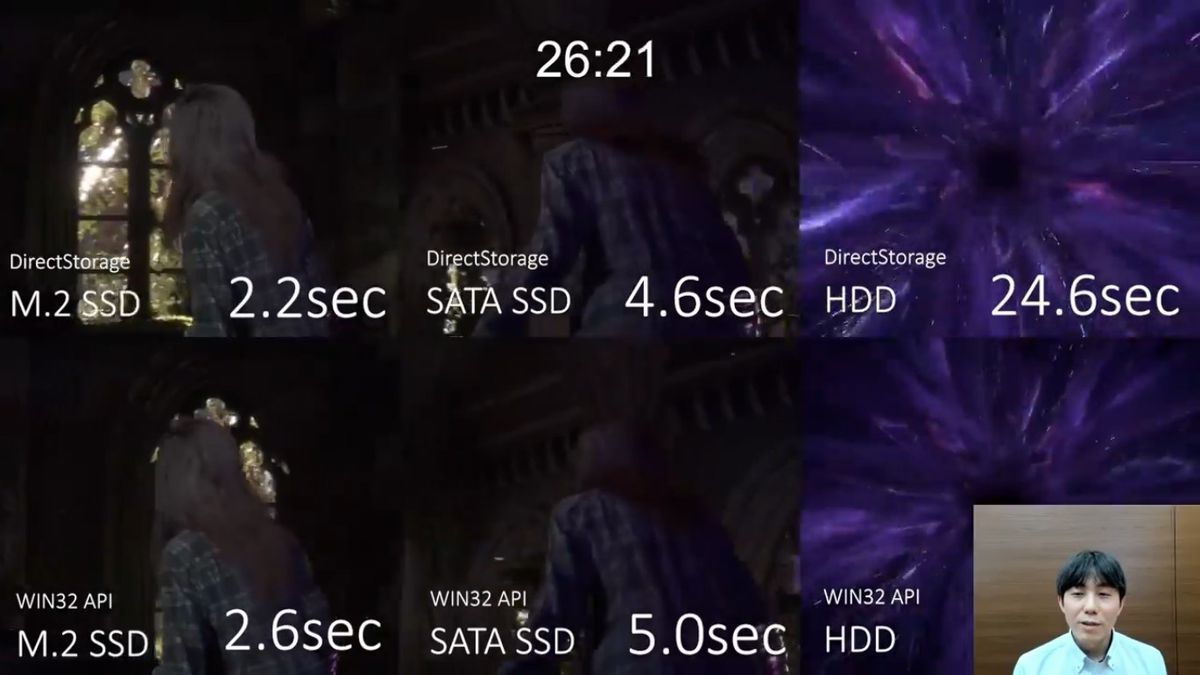 You might be wondering if that’s substantially faster than games run without DirectStorage, and Ono admits the answer is actually no, not yet: while you’ll definitely see a huge speed boost from an SSD over the magnetic spinning platters of a hard drive, and from an NVMe SSD over a slower SATA-based drive, the current implementation of DirectStorage in Forspoken is only removing one of the big I/O bottlenecks — others exist on the CPU.

And if you’ve been hoping that DirectStorage will bring enhanced performance with regular spinning hard drives, the answer is not yet: “HDDs are not delivering the anticipated result due to hardware performance limitations,” says Ono. 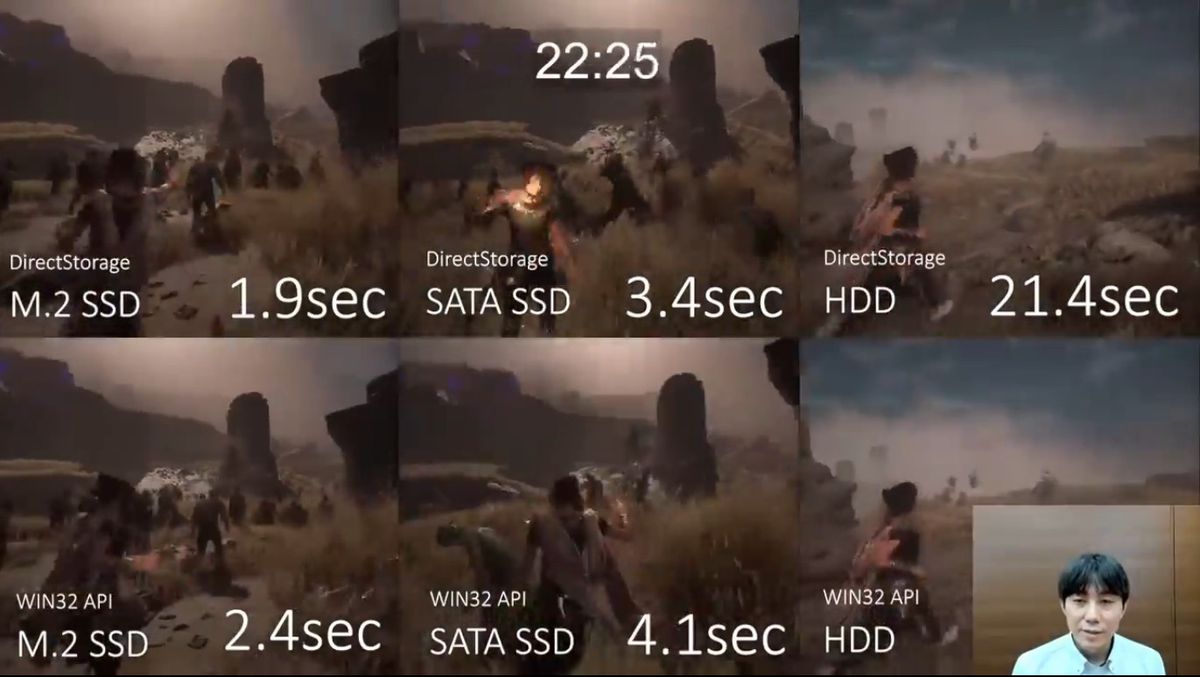 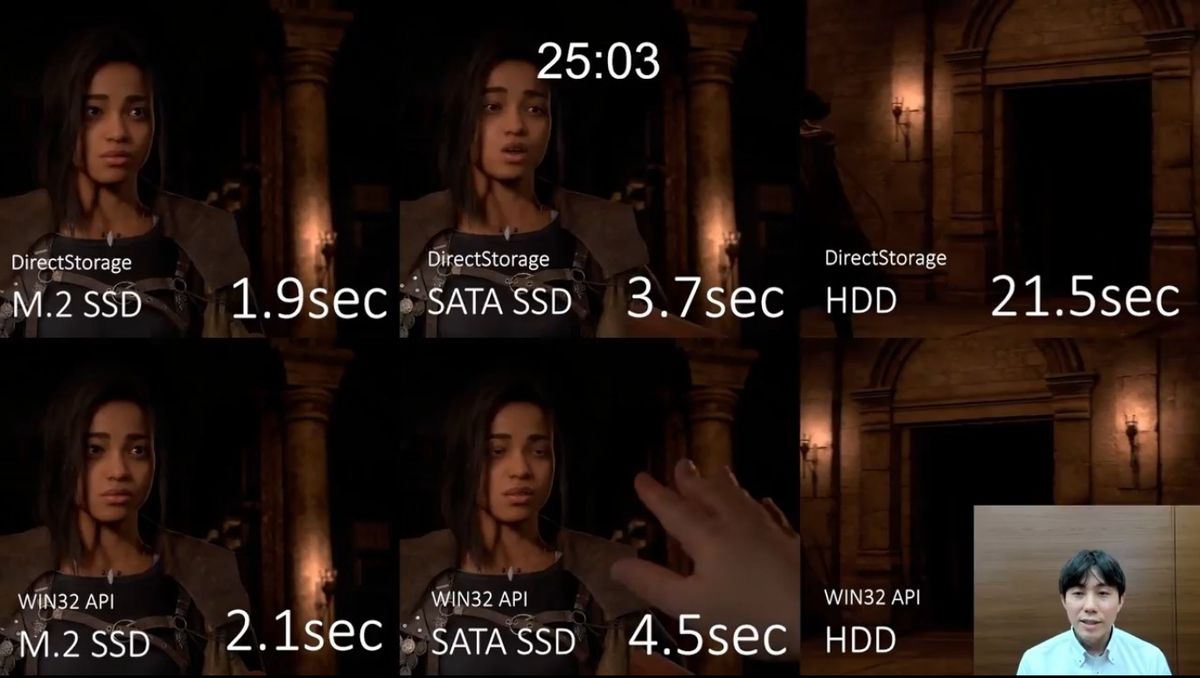 But, says Ono, “I/O is no longer a bottleneck for loading times” — the data transfer speeds of DirectStorage are clearly faster for SSDs, and they could improve it in future if they figure out other CPU bottlenecks and take full advantage of GPU asset decompression.

Generally, he says, most PC games don’t take anywhere near as much advantage of speedy NVMe SSD as Forspoken, claiming that most games have loading times of over 10 seconds. In my experience, the fastest load times I’ve seen were on Final Fantasy VII Remake Intergrade on a PS5, which can take just 10 seconds from the time you leave the PS5’s home screen to the time you can move your character, four to five times faster than on PS4. It’s not clear if Forspoken is counting from app launch to playable gameplay or not.

With Forspoken, Ono says they’re using other techniques to speed up load times as well, such as loading the game in advance while you’re on the title screen.

AMD also revealed today that Forspoken will support FidelityFX Super Resolution 2.0 temporal upscaling for higher effective resolutions or faster framerates, which the team says took less than a week to integrate into the game.