Mar 22, 2022
According to Russian state-owned news agency Tass, the Lefortovo court in Moscow convicted Navalny over allegations that he stole from his Anti-Corruption Foundation, as well as contempt of court.
Prosecutors had announced they were seeking a sentence of 13 years in prison.
Navalny is currently serving a two-and-a-half-year sentence in a detention center east of Moscow after being arrested in February 2021, a verdict he said was politically motivated.
Tuesday’s sentence was handed down at the Pokrov penal colony by a visiting session of the Lefortovo court.
“Navalny committed fraud, i.e. the theft of someone else’s property by deception,” Judge Margarita Kotova read out in the verdict, Tass reported. 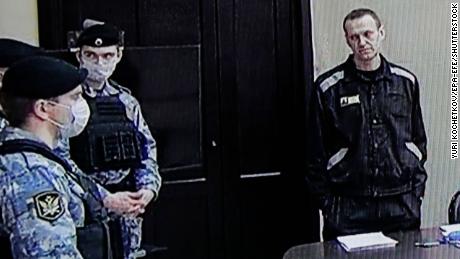 While the judge read out the accusations against him, the 45-year-old Navalny cut a gaunt figure beside his lawyers in a room filled with prison security officers, according to Reuters. He appeared unfazed, looking down as he flipped through court documents.
The opposition leader was detained in February 2021 after his arrival in Moscow from Berlin, Germany, where he had spent several months recovering from poisoning with nerve agent Novichok — an attack he blames on Russian security services and on Russian President Vladimir Putin himself.
In January, Russia added Navalny and his top aides to the “extremist and terrorist” federal registry, according to the Russian Federal Service for Financial Monitoring. His Anti-Corruption Foundation (FBK) was also banned by the Russian courts last year as an “extremist” organization.
While in prison, Navalny has denounced Russia’s invasion of Ukraine via social media, advocating anti-war protests across the country as “the backbone of the movement against war and death,” according to Reuters. 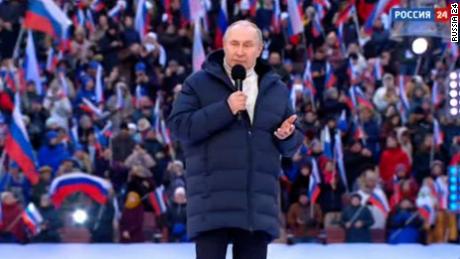 In the wake of Russia’s invasion of Ukraine almost a month ago, thousands of people were detained for anti-war demonstrations, including in Moscow and St. Petersburg.
The guilty verdict handed to Navalny comes amid a growing crackdown on political dissent in Russia.
Earlier this month, Putin signed a censorship bill into law making it impossible for news organizations to accurately report the news in or from Russia.
The law, according to the Committee to Protect Journalists, makes it a crime to disseminate “fake” information about the invasion of Ukraine, with a penalty of up to 15 years in prison for anyone convicted.
Last year, concerns about Navalny’s health were raised by his allies after he underwent a weekslong hunger strike demanding “proper medical care” — something his team claims he was unable to get in the penal colony in Pokrov.
Days after ending his hunger strike in April, Navalny’s network of regional offices for his political movement were “officially disbanded,” according to his chief of staff Leonid Volkov.