The NFL landscape has significant changed since free agency began last week. With the opportunity to fill roster holes (or not), teams may have shifted their approaches to the 2022 NFL Draft. On a separate note, the David Ojabo injury is also a major twist to consider. And so it’s only fitting that we have a new Mel Kiper mock draft to discuss.

Prior to the creation of this mock, the Philadelphia Eagles only added two external free agents. But the Birds signing Haason Reddick and Zach Pascal did not prevent Kiper from giving them more help at edge rusher and wide receiver.

The Eagles haven’t been super active in free agency, though they did add impact edge rusher Haason Reddick and bring back defensive tackle Fletcher Cox. I don’t think any of their needs have changed since my last mock draft. I’m looking at wide receiver, cornerback, safety, off-ball linebacker and defensive end — yes, they still need one — to fill out their three first-round picks. That leads me to Johnson, a one-year starter who transferred from Georgia to FSU and had a stellar 2021 season. He was excellent at the Senior Bowl and has moved from a possible top-50 pick to likely landing in the top 20. NFL teams always want pass-rushers, and he could help immediately.

As Kiper noted, Johnson has been a riser in the pre-draft process. He followed up a good Senior Bowl week by posting strong numbers at the Combine. 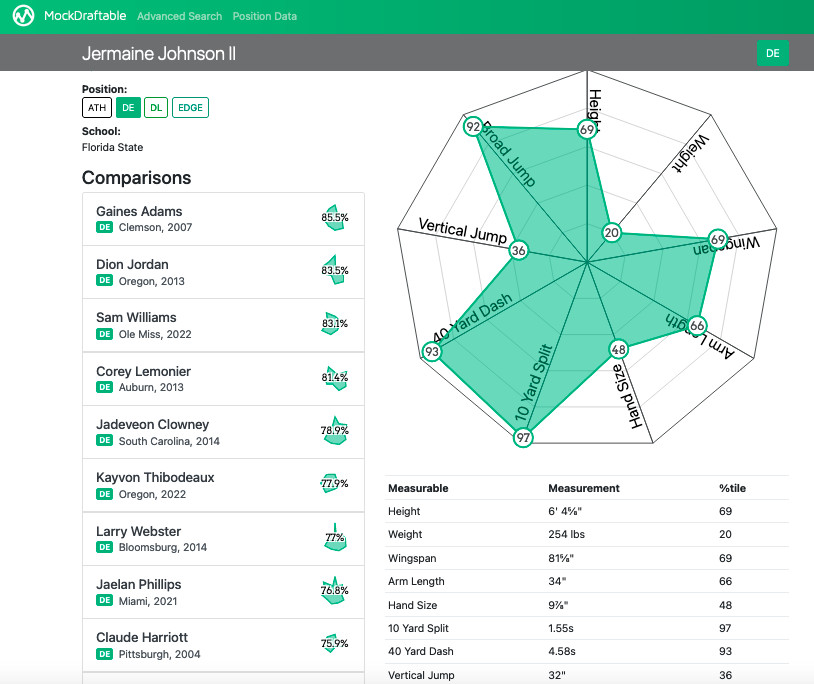 There’s a chance Johnson won’t be on the board at Philly’s first pick. If he is, I could definitely see the Eagles taking him. Several reasons why:

The scouting report on Johnson indicates he has room to develop. It could be ideal for him to land in Philly where he wouldn’t have to see a major snap count from Day 1. Via NFL.com’s Lance Zierlein:

Ascending edge prospect. Johnson has NFL traits and the potential to keep getting bigger and better as a pro. He is a one-year full-time starter with an underdeveloped pass rush and occasional lapses in awareness, but both areas should be correctable with more coaching and game experience. He’s more instinctive and consistent as a run defender, but his length and relentlessness are excellent building blocks for challenging protection. Johnson’s blend of strength and athleticism should make him a firm edge-setter and playmaker near the line of scrimmage for odd or even fronts. He has the traits, athleticism and talent to project as a top-40 pick with a bright future.

Olave can play early and often for a Philadelphia team that has to get more out of its passing game with quarterback Jalen Hurts. Olave is a speedster (4.39 40-yard dash at the combine) who had 13 touchdowns last season. This would be the Eagles’ third straight draft taking a wideout in Round 1, but it should be a priority if they want to get back to the playoffs.

With receivers not exactly lining up to play with Hurts in Philly, the draft is likely the Eagles’ best avenue to upgrading their receiver talent.

On one hand, Olave’s slighter frame gives me some hesitation. The Eagles don’t want to build a receiving corps that’s too small with DeVonta Smith and Quez Watkins already on the lighter side.

On the other hand, valuing fit over talent is how the Eagles ended up with Jalen Reagor of Justin Jefferson. Though it would be ideal for Philly to add someone with size, the bottom line is they need more talent at the receiver position.

Also, the Eagles did add some size to the position with the Pascal signing. He measures in at 6’2” with a 57-percentile broad jump. Pascal offers some physicality that may have been lacking and it may be especially valuable in the red zone.

But back to Olave. There’s some thought he might be the best receiver in this year’s class. Kiper doesn’t exactly agree considering he has Olave as the third WR off the board. Kiper (shockingly) has Drake London going to the New York Jets at No. 4 with Garrett Wilson to the Atlanta Falcons as the No. 8 pick.

The Eagles can’t really have too much speed and playmaking ability. Olave, who turns 22 in June, could be a sensible addition.

Here’s a spot to fill Philadelphia’s void at off-ball linebacker. Lloyd was one of the best all-around defenders in college football last season, racking up 111 total tackles, eight sacks, 20 tackles for loss, four interceptions and a forced fumble. He has some juice as a blitzer and can cover tight ends and running backs in the passing game. Lloyd’s 4.66 40-yard dash at the combine means he doesn’t have the straight-line speed of former top-five pick Devin White (a linebacker I’ve compared him to), but I don’t think he should drop past the Eagles. That’s three early starters for the Eagles here, with Lloyd, Chris Olave and Jermaine Johnson II.

The Eagles really need to add some linebacker talent after failing to address the position in free agency thus far. It’s still hard to believe they’re actually going to do it in the first round until we see it happen.