Miami Beach declared a state of emergency and imposed a midnight curfew through the weekend, the city said Wednesday. The measures come after two shootings in recent days injured five people.

The curfew, which will begin on Thursday and end on Monday, runs from midnight to 6:00 a.m. each night. Businesses in the area will be closed, and restaurants will be open for delivery only after that time. Essential services will not be affected, and residents will still be permitted to leave and arrive at their homes.

City of Miami Beach Issues State of Emergency and Curfew
—Curfew to be in effect from Thursday, March 24 until Monday, March 28—

Plans for the curfew and state of emergency were first announced Monday, in the wake of two shootings in a 48-hour period that wounded five people total, CBS Miami reported. City officials will meet this week to decide on extending the curfew.

“It is horribly sad that we’re standing here for the cowardly acts of random people,” City Manager Alina Hudak said this week, according to CBS Miami. She said both shootings targeted “innocent bystanders.”

“No community, no police force, should have to suffer through this,” said Mayor Dan Gelber. “You know I’m really tired of it, frankly, I’d love to get rid of spring break. I wish the spring breakers would go somewhere else.” 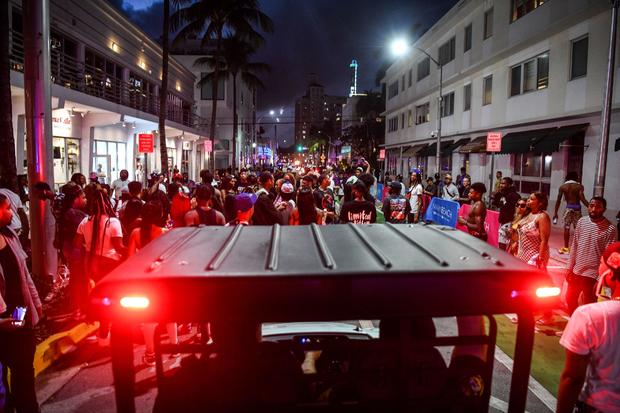 “It was just a shock to hear the gunshots and all of the commotion outside of the window,” a witness to the Monday shooting told CBS Miami. “It was like a couple of pow, pow, pows and you heard all of the screaming and everyone saying ‘run.'”

A 19-year-old was arrested and charged with carrying a concealed firearm and tampering with evidence in connection with the Monday shooting, but the primary suspect has not yet been apprehended, CBS Miami said.

Stimulus checks for gas? Here’s what could be coming your way.

6 teenage girls killed in Oklahoma crash: “Our hearts are broken”

Madeleine Albright, first woman to serve as secretary of state, dies at 84

Victoria Albert is a News Editor at CBS News. Reach her at victoria.albert@viacomcbs.com