NATO estimated on Wednesday that 7,000 to 15,000 Russian soldiers have been killed in four weeks of war in Ukraine, where fierce resistance from the country’s defenders has denied Moscow the lightning victory it sought.

By way of comparison, Russia lost about 15,000 troops over 10 years in Afghanistan.

A senior NATO military official said the alliance’s estimate was based on information from Ukrainian authorities, what Russia has released — intentionally or not — and intelligence gathered from open sources. The official spoke on condition of anonymity under ground rules set by NATO.

Ukraine has released little information about its own military losses, and the West has not given an estimate, but President Volodymr Zelensky said nearly two weeks ago that about 1,300 Ukrainian servicemen had been killed.

When Russia unleashed its invasion Feb. 24 in Europe’s biggest offensive since World War II, a swift toppling of Ukraine’s government seemed likely. But with Wednesday marking four full weeks of fighting, Moscow is bogged down in a grinding military campaign.

Zelensky — who has riveted the world’s attention with ad hoc videos and speeches to legislatures seeking military aid for his country — seized on the anniversary to plead for people around the world to gather in public Thursday to show support for Ukraine, saying the war breaks the heart of “every free person on the planet.”

A Ukrainian firefighter sprays water inside a house destroyed by shelling in Kyiv.Vadim Ghirda/AP

“Come to your squares, your streets. Make yourselves visible and heard,” Zelensky said in English during an emotional video address to the nation, recorded in the dark near the presidential offices in Kyiv. “Say that people matter. Freedom matters. Peace matters. Ukraine matters.”

Speaking in Russian, Zelensky appealed to Russians “to leave Russia so as not to give your tax money to the war.” Tens of thousands of Russians already have fled their country since the war began, fearing an intensifying crackdown on dissent that has included the arrest of thousands of antiwar protesters and suppression of the media.

Zelensky, who will speak to NATO members by video on Thursday, also said he is asking the alliance to provide “effective and unrestricted” support to Ukraine, including any weapons the country needs to fend off the Russian invasion.

With its ground forces slowed or stopped by hit-and-run Ukrainian units armed with Western-supplied weapons, Russian President Vladimir Putin’s troops are bombarding targets from afar, falling back on the tactics they used in reducing cities to rubble in Syria and Chechnya.

A senior US defense official said Wednesday that Russian ground forces appear to be digging in and setting up defensive positions 9 to 12 miles outside Kyiv, the capital, as they make little to no progress toward the city center. 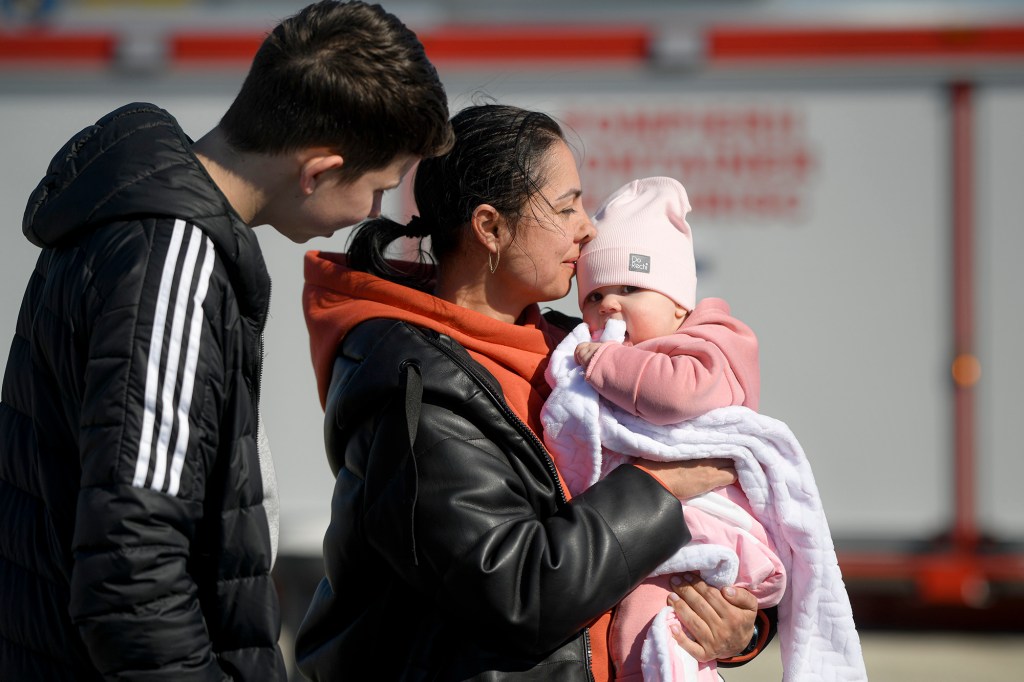 A Ukrainian refugee hugs her daughter after crossing the border into Romania, fleeing the war. Andreea Alexandru/AP

The official, who spoke on condition of anonymity to discuss military assessments, said it appears the forces are no longer trying to advance into the city, and in some areas east of Kyiv, Ukrainian troops have pushed Russian soldiers farther away.

Instead, Russian troops appear to be prioritizing the fight in the Donbas region, specifically in Luhansk and Donetsk, in what could be an effort to cut off Ukrainian troops and prevent them from moving west to defend other cities, the official said. The US also has seen activity from Russian ships in the Sea of Azov, including what appear to be efforts to send landing ships ashore with supplies, including vehicles, the official said.

In an ominous sign that Moscow might consider using nuclear weapons, a senior Russian official said the country’s nuclear arsenal would help deter the West from intervening in Ukraine.

“The Russian Federation is capable of physically destroying any aggressor or any aggressor group within minutes at any distance,” Dmitry Rogozin, the head of the state aerospace corporation, Roscosmos, said in televised remarks. He noted that Moscow’s nuclear stockpiles include tactical nuclear weapons, designed for use on battlefields, along with far more powerful nuclear-tipped intercontinental ballistic missiles. Roscosmos oversees missile-building facilities.

US officials long have warned that Russia’s military doctrine envisages an “escalate to deescalate” option of using battlefield nuclear weapons to force the enemy to back down in a situation when Russian forces face imminent defeat. Moscow has denied having such plans. 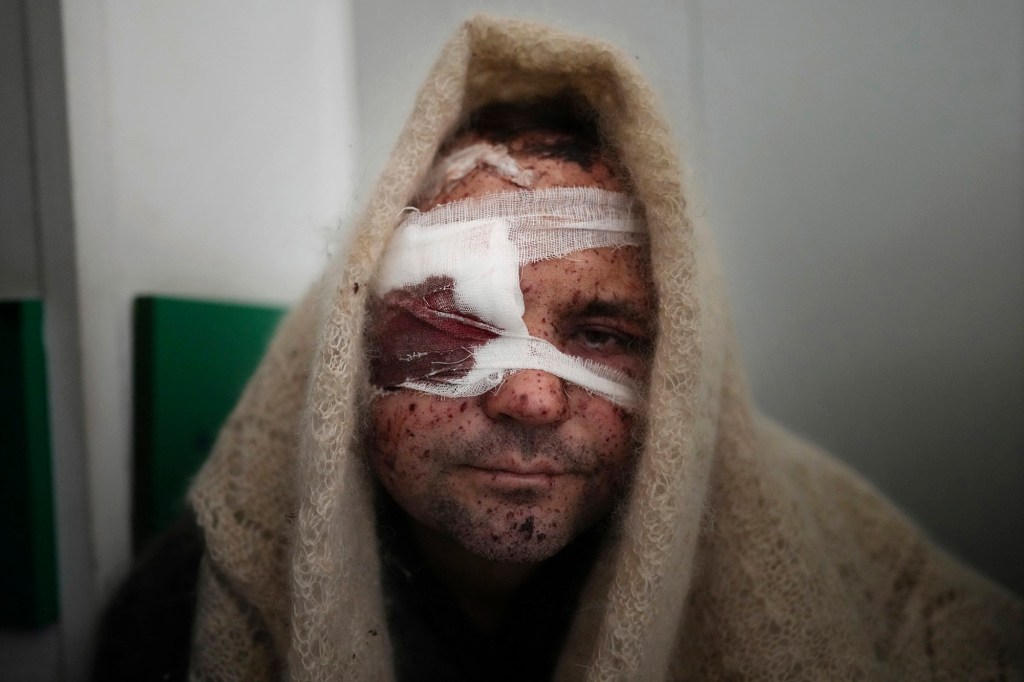 A 41-year-old Ukrainian man is treated in the hospital following shelling by Russian forces. Evgeniy Maloletka/AP

Rogozin is known for his bluster, and he did not make clear what actions by the West would be seen as meddling, but his comments almost certainly reflect thinking inside the Kremlin. Putin has warned the West that an attempt to introduce a no-fly zone over Ukraine would draw it into a conflict with Russia. Western nations have said they would not create a no-fly zone to protect Ukraine.

As US President Joe Biden left for Europe to meet with key allies about new sanctions against Moscow and more military aid to Ukraine, he warned there is a “real threat” Russia could use chemical weapons.

On the eve of a meeting with Biden, European Union nations signed off on another $550 million in military aid for Ukraine.

Zelensky appealed to Western countries to stay united in the face of Russia’s efforts to “lobby its interests” with “some partners” to bring them over to its side, and noted during his national address that Ukraine has not received the fighter jets or modern air-defense systems it requested. He said Ukraine also needs tanks and anti-ship systems.

“It has been a month of defending ourselves from attempts to destroy us, wipe us off the face of the earth,” he said.

The US has determined that Russian troops have committed war crimes in Ukraine, and it will work to prosecute the offenders, Secretary of State Antony Blinken said. He cited evidence of indiscriminate or deliberate attacks against civilians and the destruction of apartment buildings, schools, hospitals, shopping centers and other sites.

Still, major Russian objectives remain unfulfilled. Kyiv has been bombarded repeatedly but is not even encircled. 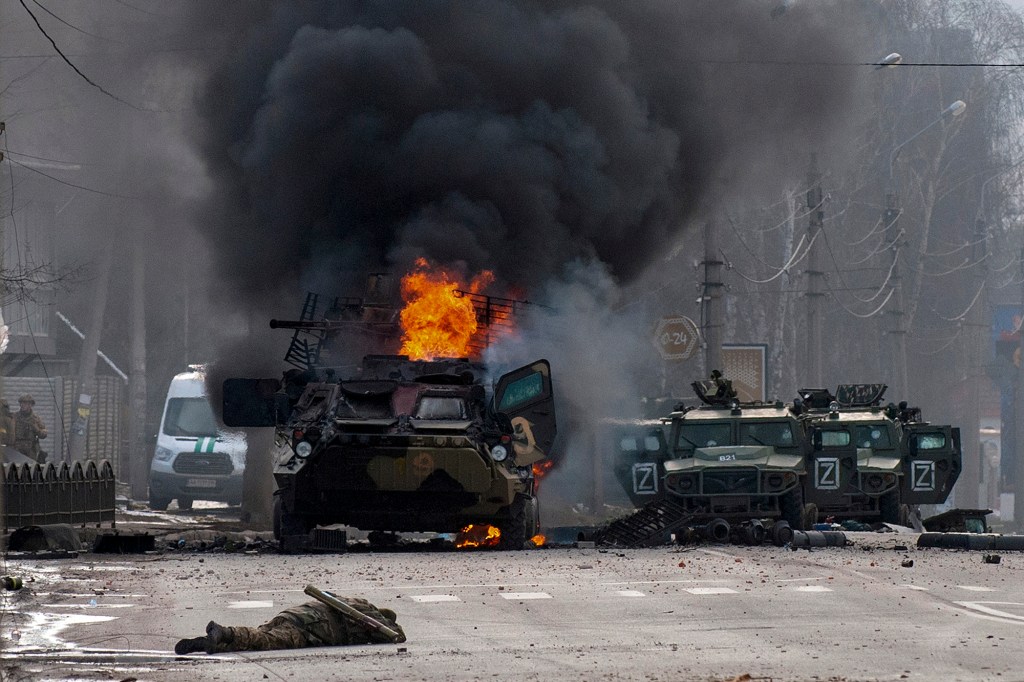 Near-constant shelling and gunfire shook the city Wednesday, with air raid sirens wailing and plumes of black smoke rising from the western outskirts, where the two sides battled for control of multiple suburbs. Mayor Vitali Klitschko said at least 264 civilians have been killed in the capital since the war broke out.

The shelling also claimed the life of another journalist Wednesday. The independent Russian news outlet The Insider said Russian journalist Oksana Baulina had been killed in a Kyiv neighborhood.

In the south, the encircled port city of Mariupol has seen the worst devastation of the war, enduring weeks of bombardment and, now, street-by-street fighting. But Ukrainian forces have prevented its fall, thwarting an apparent bid by Moscow to fully secure a land bridge from Russia to Crimea, seized from Ukraine in 2014.

Zelensky said 100,000 civilians remain in the city, which had 430,000 people before the war. Efforts to get desperately needed food and other supplies to those trapped have often failed. 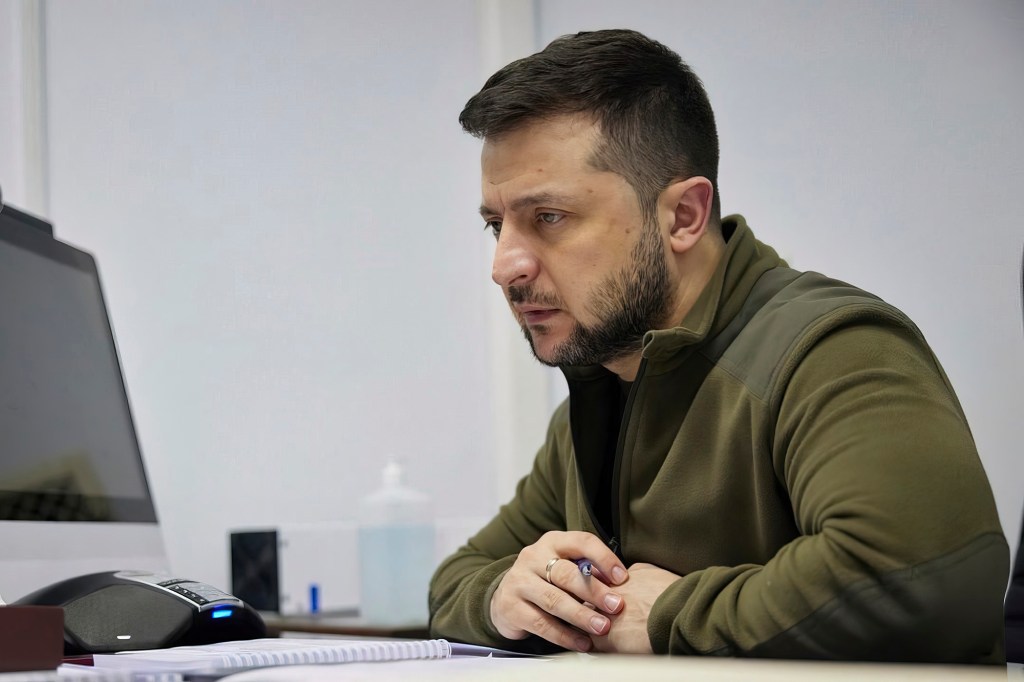 In their last update, over a week ago, Mariupol officials said at least 2,300 people had died, but the true toll is probably much higher. Airstrikes in the past week destroyed a theater and an art school where civilians were sheltering.

In the besieged northern city of Chernihiv, Russian forces bombed and destroyed a bridge that was used for aid deliveries and civilian evacuations, regional governor Viacheslav Chaus said.

Kateryna Mytkevich, who arrived in Poland after fleeing Chernihiv, wiped away tears as she spoke about what she had seen. The city is without gas, electricity or running water, said Mytkevich, 39, and entire neighborhoods have been destroyed.

“I don’t understand why we have such a curse,” she said.

Despite plenty of evidence to the contrary, Kremlin spokesman Dmitry Peskov insisted the military operation is going “strictly in accordance” with plans. 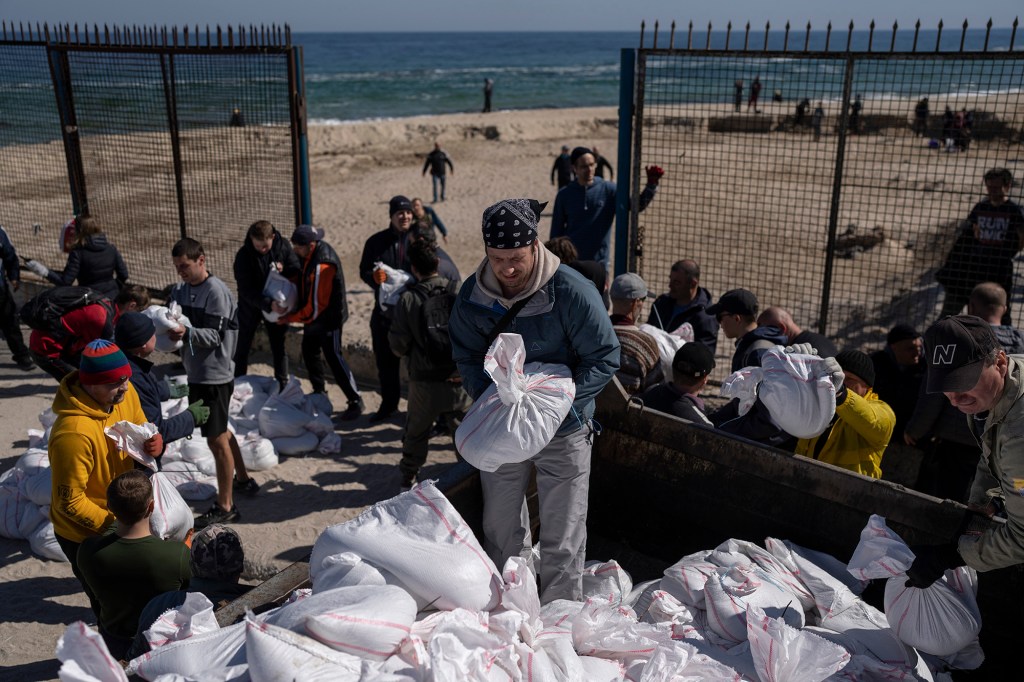 The NATO official said 30,000 to 40,000 Russian soldiers are estimated to have been killed or wounded. In its last update, Russia said March 2 that nearly 500 soldiers had been killed and almost 1,600 wounded.

The figures from NATO represent the alliance’s first public estimate of Russian casualties since the war began. The US government has largely declined to provide estimates of Russian or Ukrainian casualties, saying available information is of questionable reliability.

Anna reported from Lviv, Ukraine. Associated Press writers Robert Burns in Washington, Yuras Karmanau in Lviv, and other AP journalists around the world contributed to this report.

Follow the AP’s coverage of the war at https://apnews.com/hub/russia-ukraine