Rescuers scouring a remote Chinese mountainside Tuesday discovered charred personal belongings from the wreckage of the China Eastern plane that mysteriously fell from the sky a day earlier  — but still no sign of any survivors.

Wallets, bank cards and official identity cards have been among the items so far located near the crash site of China Eastern Flight 5735 in the southern region of Guangxi, China’s state media said.

Small pieces of the Boeing 737-800 plane that crashed near the city of Wuzhou have also been found scattered throughout the mountainside, with videos showing patches of land charred by the fiery wreckage.

Search teams were using their hands, picks, sniffer dogs and drones to look for survivors on both sides of the mountain into which the plane crashed.

“As of now, the rescue has yet to find survivors,” a grim-faced Zhu Tao, director of the Office of Aviation Safety at the Civil Aviation Authority of China, told a news conference.

Local media and authorities haven’t revealed whether any human remains have been found.

The flight had been carrying 132 people on board when it plummeted 30,000 feet Monday and burst into a huge fireball, the airline said. No foreigners were on the plane, according to an initial analysis by China’s Foreign Ministry. 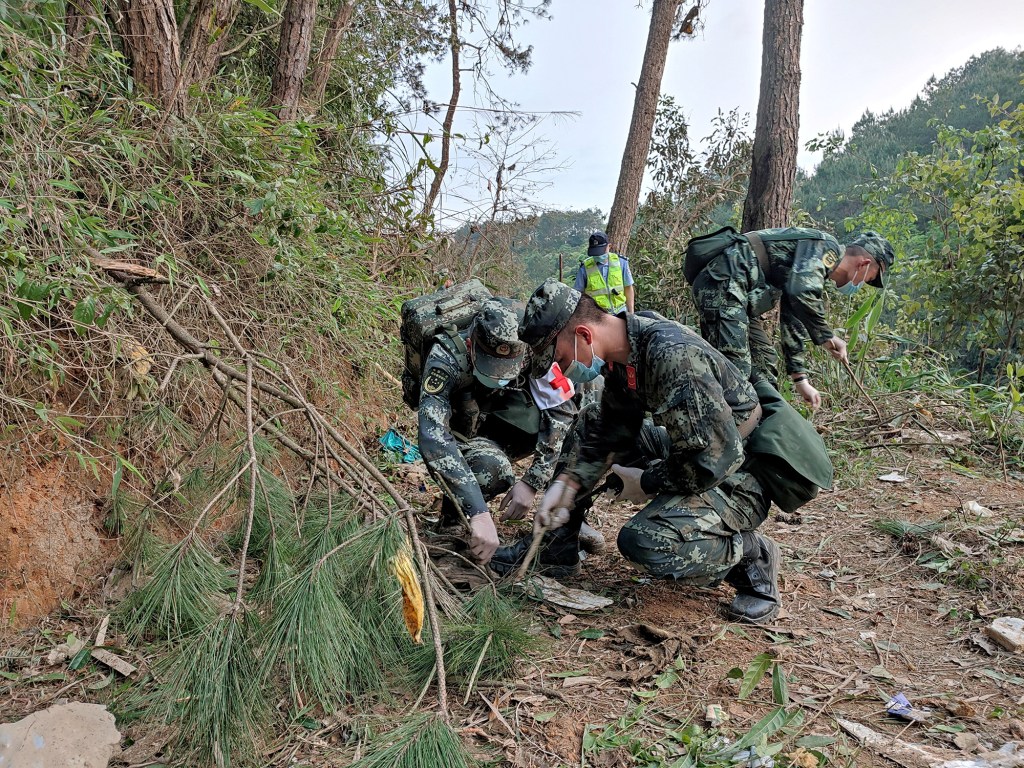 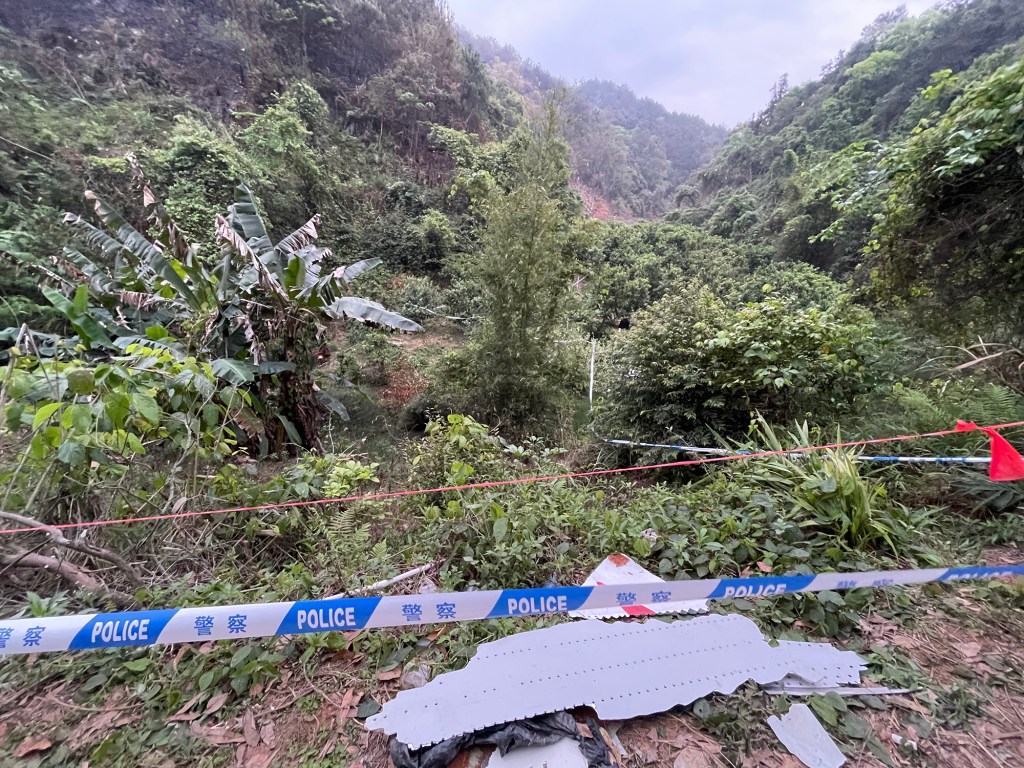 Zhu said efforts were now focused on finding the plane’s black box, which holds the flight data and cockpit voice recorders, as officials try to establish the cause of the crash.

He added that the aircraft did not respond to repeated calls from air controllers during its rapid descent. The plane stopped transmitting data about a minute and a half after it started to lose altitude.

“The jet was seriously damaged during the crash, and investigations will face a very high level of difficulty,” Zhu said. 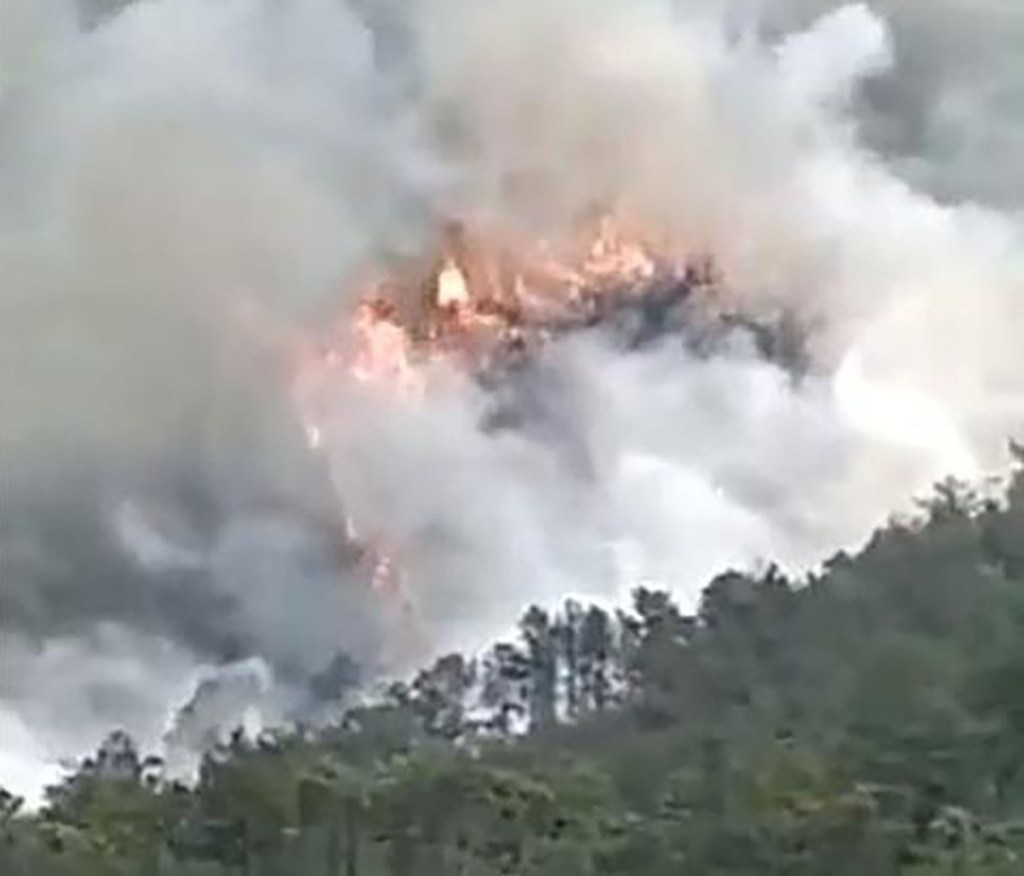 Footage of the fiery crash.Twitter

“We still do not have a clear assessment of the cause for the crash.”

Rescue officials had earlier revealed that Flight 5735 had disintegrated upon impact.

The flight was traveling at 30,000 feet when it suddenly started to nosedive at about 2:20 p.m. Monday. It plunged to about 7,400 feet, then briefly regained 1,200 feet, before it plunged again at a rate of 31,000 feet per minute, according to FlighRadar24, a flight tracking website. 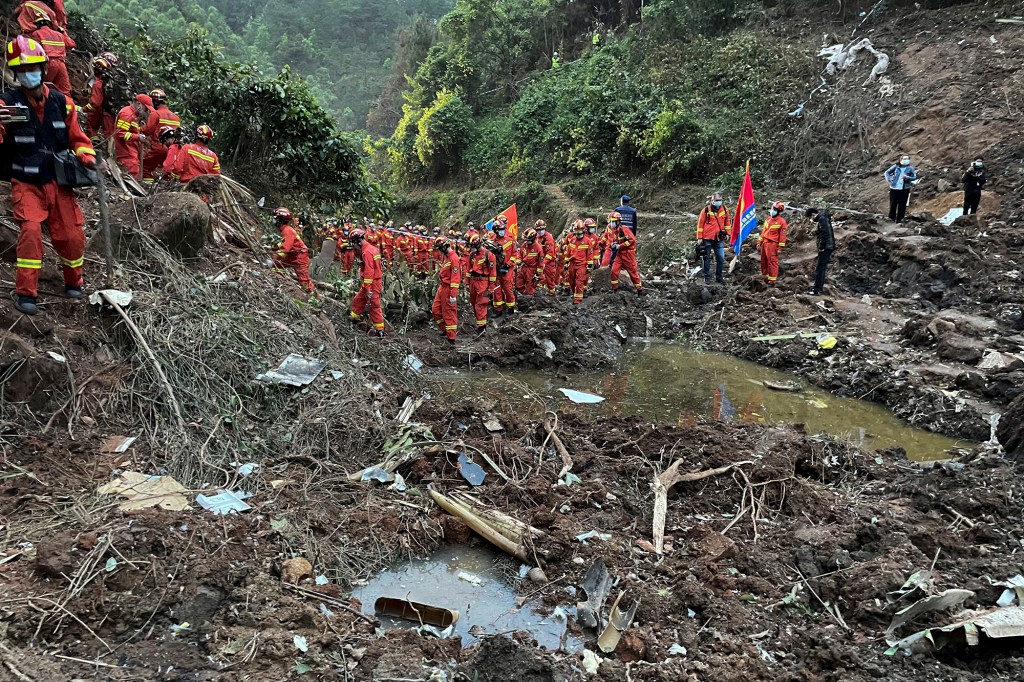 Rescuers search at the site of the crash in Tengxian County in China on March 22, 2022.Zhou Hua/Xinhua via AP

Horrifying footage captured the doomed plane’s free fall toward the ground, and the subsequent fiery crash was large enough to be seen on NASA satellite images.

The pilots may have been unresponsive just before the crash because of their training, aviation experts said.

“If they were dealing with an emergency, pilots are taught to aviate, navigate, then communicate.’ Meaning, fly the airplane first,” said William Waldock, a professor of safety science at Embry-Riddle Aeronautical University in Prescott, Ariz. 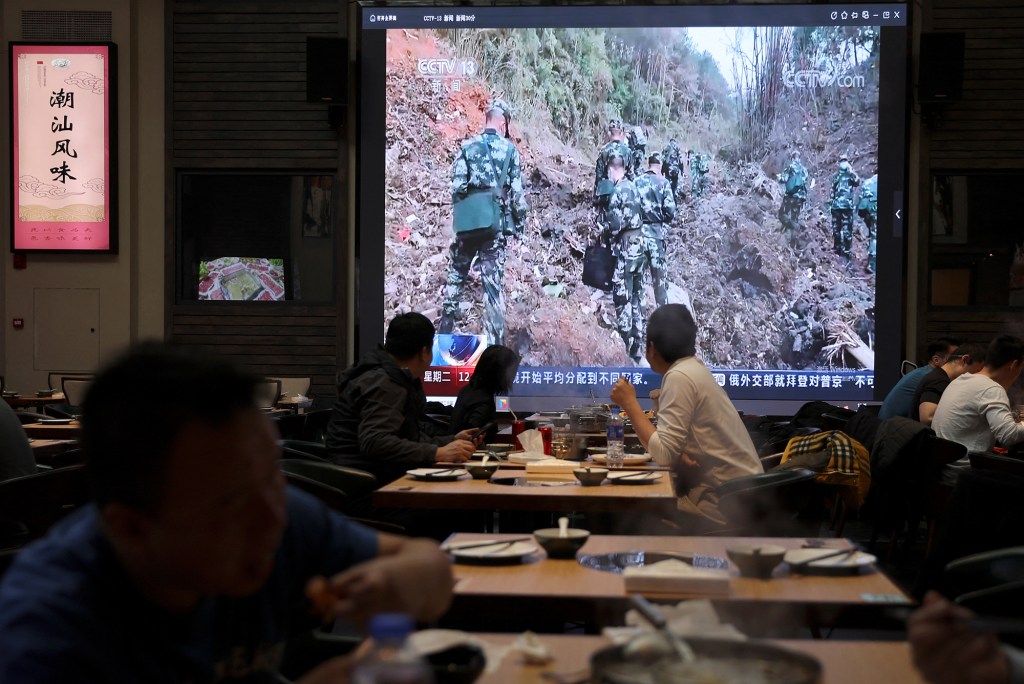 Pieces of the Boeing 737-800 have been found scattered throughout the mountainside.REUTERS

“If it was some sort of major mechanical problem, they may have had their hands full trying to control the aircraft.”

The flight had taken off from the city of Kunming and was en route to Guangzhou.

Family members of those on board gathered at both Kunming and Guangzhou airports on Tuesday awaiting news of their loved ones. 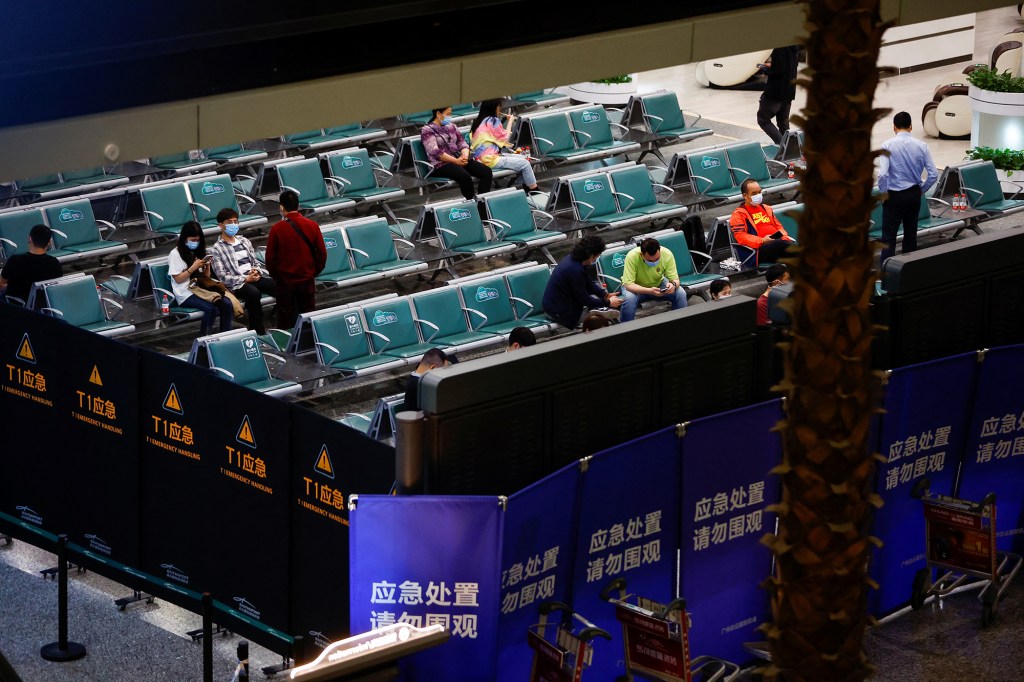 Relatives of the passengers wait for news.REUTERS

The crash is the first major airline disaster for China in a decade after the country pushed to improve its safety protocols since the turn of the century.

China last reported a major airline disaster in 2010, when a Henan Airlines flight crashed short of a runway in Yichun. Pilot error was blamed in that case — which left 44 people dead.

China Eastern’s last fatal crash was in November 2004, when a CRJ-200 plummeted into a frozen lake, killing 43 people on board and two people on the ground in Baotou in Inner Mongolia. 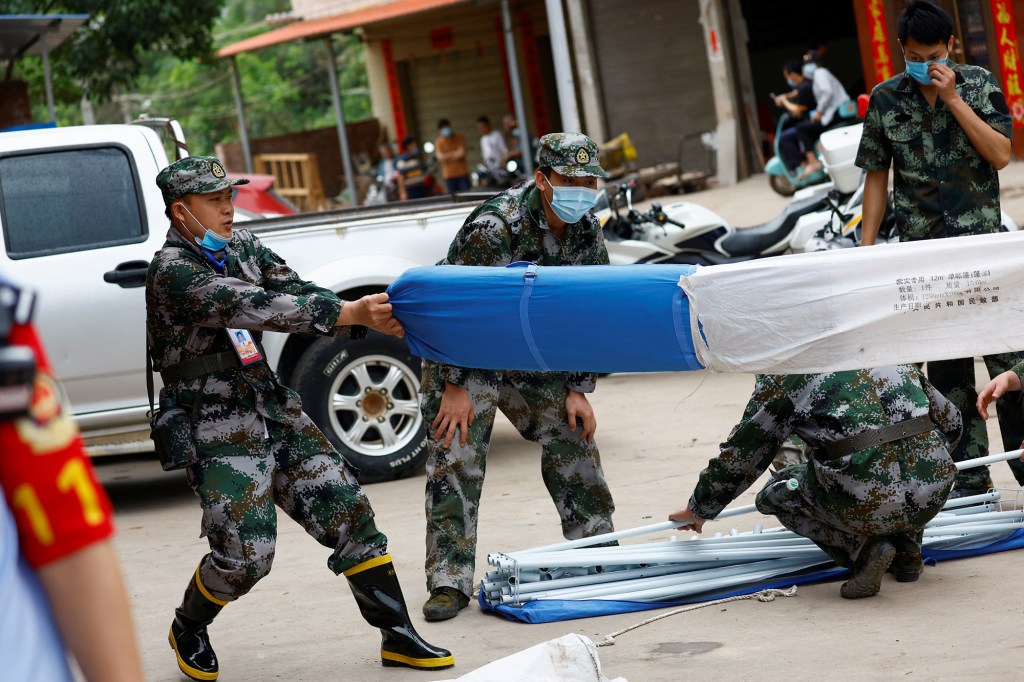 Militia members set up tents near the crash site.REUTERS

Monday’s crash also has implications for airplane manufacturer Boeing, which saw its 737 Max model grounded for nearly two years after crashes in 2018 and 2019. The Boeing 737-800 is an earlier model than the 737 Max.

Boeing Chief Executive Dave Calhoun said the company was offering its technical experts to help in the investigation.

“The thoughts of all of us at Boeing are with the passengers and crew members … as well as their families and loves ones,” Calhoun wrote in a message to Boeing employees. 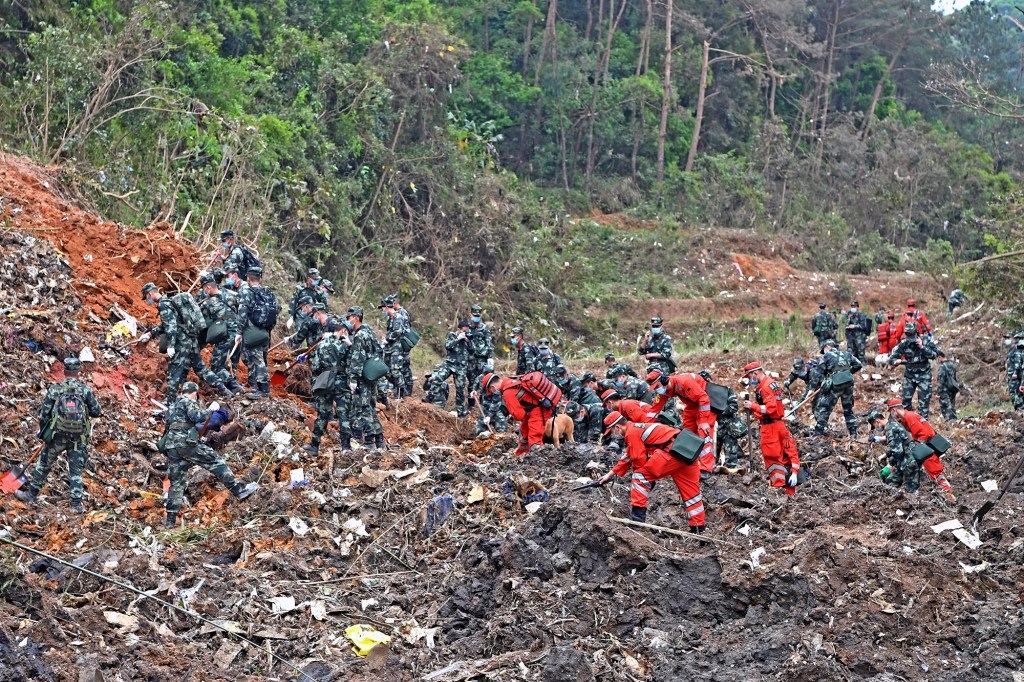 China Eastern Flight 5735 crashed on Monday with 132 people on board. Zhou Hua/Xinhua via AP

China’s Communist Party has been planning to manufacture its own large passenger jets to compete with Boeing.