Protesters in Jamaica spurn British royals ahead of official visit 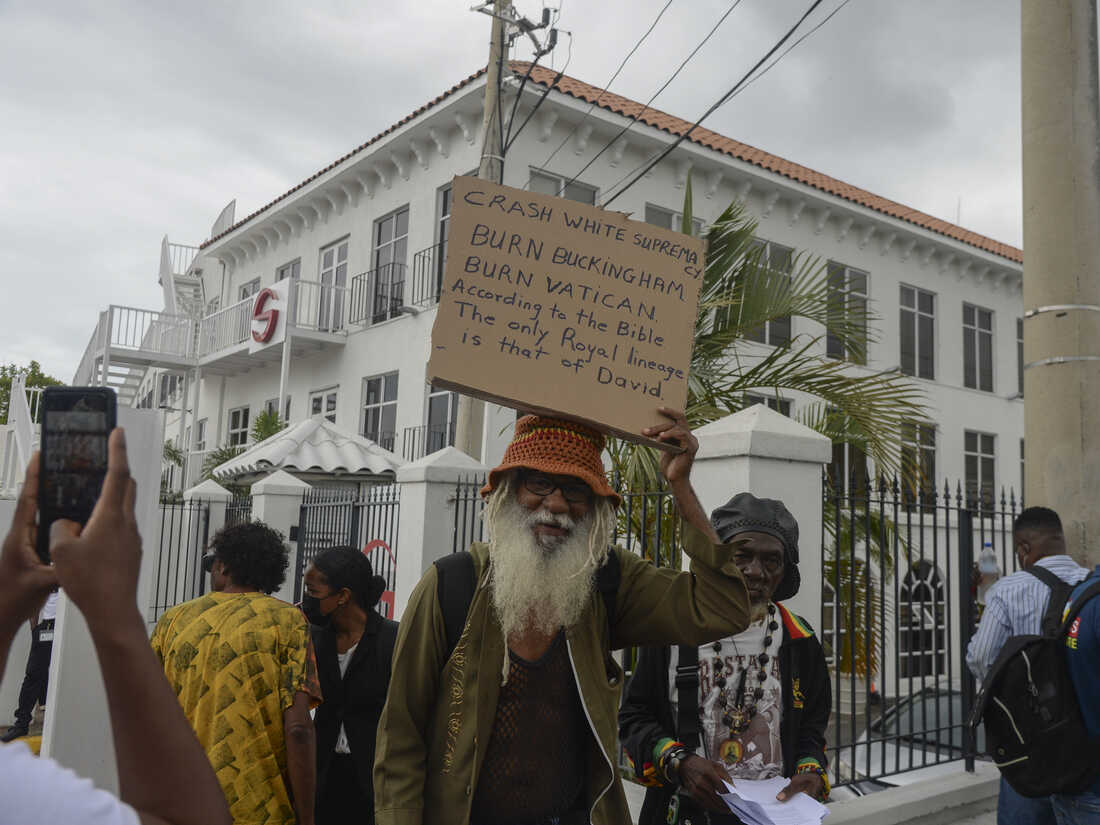 People protest to demand an apology and slavery reparations during a visit to the former British colony by the Duke and Duchess of Cambridge, Prince William and Kate, in Kingston, Jamaica, on Tuesday. Collin Reid/AP hide caption

SAN JUAN, Puerto Rico — Protesters in Jamaica raised their fists Tuesday as they donned T-shirts emblazoned with a pair of shackled Black wrists surrounded by the phrases “Seh Yuh Sorry!” and “Apologize now!” as they demonstrated just hours before Prince William and Kate arrived.

The protest in front of the British High Commission in Kingston comes a couple of days after dozens of prominent leaders in Jamaica publicized a letter demanding that Britain apologize and award its former colony slavery reparations. They also decried the weeklong Central American and Caribbean tour that the Duke and Duchess of Cambridge embarked on Saturday, which coincides with Jamaica’s 60th independence anniversary and the 70th anniversary of Queen Elizabeth II’s coronation.

“Kings, Queens and Princesses and Princes belong in fairytales, NOT in Jamaica!” read one poster held aloft by a young girl who joined the protest.

The royal couple’s trip, which began with a stop in Belize followed by scheduled visits to Jamaica and the Bahamas, was organized at the queen’s behest as some countries debate cutting ties to the monarchy like Barbados did in November.

Mike Henry, a veteran Jamaican lawmaker, said in a phone interview that while the topic has been discussed, he worries that demands for an apology and reparations would be rendered moot if the island stopped pledging allegiance to the queen.

Maziki Thame, a senior lecturer at the University of the West Indies, noted that Jamaicans have been seeking reparations for decades.

“This is not a new cause,” she said in a phone interview as she prepared to join the protest. “The question is whether it will get any traction…whether the British are ready to contend with their history.”

The British empire controlled Jamaica for more than 300 years and forced hundreds of thousands of African slaves to toil the island under brutal conditions. Sugar replaced tobacco and cocoa as the main crop, with some 430 sugar estates reported by the mid-1700s, up from 57 nearly a century prior, according to Jamaica Information Services, a government agency.

The group protesting the royal visit noted in its letter that the British raped and killed thousands of slaves as it sought an apology for 60 reasons, including “for refusing to acknowledge the historic trade in Africans as a crime against humanity,” and for “pretending that the British led the abolition movement, when our ancestors worked, prayed and fought hard for this.”

Thame, the university professor, said she and many other Jamaicans are not celebrating what is known as the queen’s Platinum Jubilee.

“That doesn’t speak to us in the way they might imagine that speaks to us,” she said. “In the 20th century, Jamaicans have moved beyond celebrating the crown.”

Prince William and Kate are scheduled to spend two days in Jamaica, where they’re expected to meet with government officials and tour Trench Town, the gritty birthplace of rocksteady and reggae where Bob Marley grew up.

Ahead of their trip, Jamaican singer Beenie Man told TV show Good Morning Britain that the U.K. still controls the commonwealth of Jamaica: “It’s all about the Queen, and the Queen serve and the Queen this and that – but what are they doing for Jamaica? They’re not doing anything for us.”

The monarchy has said that Britain and Jamaica have a strong trade relationship, with the island exporting goods including rum and raw cane sugar to the U.K. It also noted the creation of programs targeting poverty, security, natural disaster management, social issues and the economy.

An estimated 55,000 British citizens live in Jamaica, while some 800,000 people of Jamaican descent live in the United Kingdom. The relationship between the two countries soured in recent years after some Caribbean people who had long lived in Britain legally were denied jobs, housing or medical care, with some deported because they didn’t have the required paperwork. Britain has since apologized and pledged compensation.