Remastered Apollo mission photos are simply out of this world

Half a century after the last person walked on the moon, original footage has been digitally overhauled to show NASA’s lunar missions in a new light

THESE are the Apollo lunar missions like you have never seen them before. Taken from the new book Apollo Remastered by Andy Saunders, these illuminating images have been produced by enhancing original material to reveal new details of NASA’s forays in the 1960s and 70s.

Its programme is best known for putting the first humans on the moon in 1969 during the Apollo 11 mission, though it comprised 14 missions in total that covered everything from testing technology to collecting lunar samples. Saunders, who specialises in NASA digital restoration, created the new high-definition images from scans of 35,000 or so originals preserved in a frozen vault in Houston.

The moon’s cratered surface is laid bare in the panoramic top picture, taken during the Apollo 16 mission in 1972 and showing astronaut Charlie Duke, the youngest person to walk on the lunar surface at the age of 36. 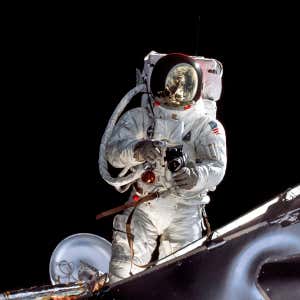 The image above shows NASA astronaut Rusty Schweickart during the Apollo 9 mission in 1969, with the Apollo spacecraft and Earth reflected in his visor.

The below image shows cue cards made by Apollo 8 astronaut Bill Anders to document the upcoming mission of testing the spacecraft in the moon’s orbit. 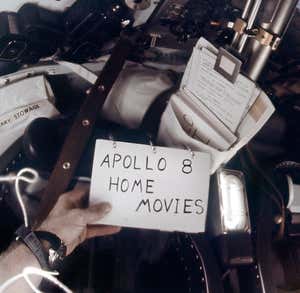 And below is a shot of Apollo 9 commander James McDivitt performing the first docking (or joining) of two crewed spacecraft. Saunders writes that this is the only photo of an Apollo astronaut in their full suit and bubble helmet during flight. The reflections of Earth, and the docking window, can be seen on McDivitt’s helmet. 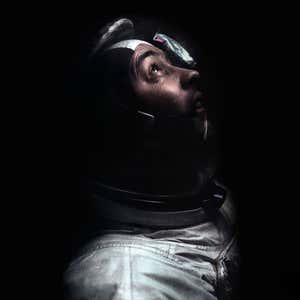 We have corrected who is being shown in the image of the Apollo 9 mission in 1969, and the name of Bill Anders