The 10 ‘most American-made’ cars and SUVs may surprise you

One Tesla model topped another to rank as the most “American-made” vehicle for 2022 in this long-running index that judges contenders based a U.S.-based assembly line, major parts sourcing and other features.

The most American-made vehicle a year ago was the Tesla Model 3, the first time that an all-electric vehicle (EV) had claimed the top spot in the list that launched in 2006. The Model 3 scores in second place for 2022.

View the complete list, including starting sticker prices. And check out the least-American cars and most “American” by category.

Both Tesla options have climbed up the list only recently, owed to the fact that the Elon Musk-founded manufacturer liked to keep complete production data close to the vest. Tesla’s stock trades down 31% in the year to date, but is up 16% compared to where it stood one year ago.

Read: Tesla stock has ‘gone on sale,’ according to one analyst. Here’s what investors should do

Related: The 2021 most ‘American-made’ auto is a first-timer in the top spot 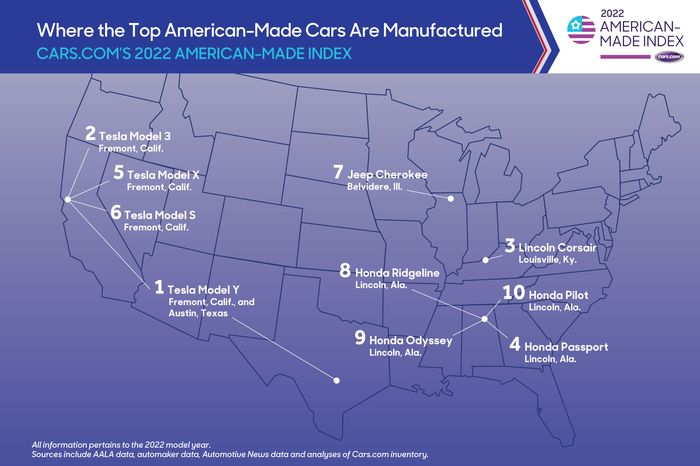 This year, of the 379 vehicles available in the U.S. auto market, 95 made the Cars.com American-Made Index.

Jenni Newman, Cars.com’s editor-in-chief, said this year’s list hits during especially interesting market conditions for car buying: gas prices RB00, +0.03% are soaring; curiosity in EVs and hybrid gas/plug-in options is on the rise; and global trade and supply chain tensions are refocusing consumers on what it might mean to be “American made.”

“That Tesla — an American-made, all-electric make — appears frequently and high up on the list may indicate a coming alignment of market forces that could really explode once we break through microchip supply chain issues, especially if gas prices remain historically high,” Newman said.

Opinion: Gas prices are way up, but real cost of driving a mile was higher for most of the past century

And just because a car is not American made does not mean it falls short on the features that make it desirable.

Perhaps the most prominent example from Cars.com’s perspective is the Ford Maverick, which it awarded both our Best of the Year 2022 and Best Pickup Truck of 2022 awards, then went out and bought; it’s manufactured in Mexico. Another Ford is the Mustang Mach-E, which shares a root nameplate with the 26th-ranked Mustang, but is an entirely separate vehicle also made in Mexico.

Cars.com explained it doesn’t rank fleet-only vehicles, nor models slated for discontinuation after the current model year without a U.S.-built successor. And the site will disqualify any vehicles for which it lacks confidence in the data, typically because they fall below minimum sales and inventory thresholds or aren’t yet on sale at the time of our research.

The Biden administration has made the push toward EV adoption a priority, part of a broader policy favoring a shift to renewable energy and reaching net-zero emissions by 2050. But the president’s critics have said U.S. reliance on imported parts may slow the U.S. job growth the White House claims can accompany rising EV popularity.

Still, the private sector sees demand shifting. Ford has vowed to make electric vehicles 40% of its global sales by 2030, while GM said it will only offer EVs and not internal combustion engines by 2035.

Rivian didn’t meet our sales threshold this year as the Illinois-based EV maker is in the early stages of ramping up production, Newman explained.

“While they didn’t make it this year, when Rivian does increase production, it is certainly possible that we will see them show up big on future American-Made Indexes,” she said.

A recent Cars.com consumer survey found that year over year, affordability increased 15% as the most important attribute for car shoppers.

Used car and truck prices have risen 16% over the past year, and 50% more than before the pandemic, according to industry data. In many cases, a used car is more expensive than a new one of the same model.

Survey respondents considering an electric or hybrid vehicle also saw a double-digit bump, up 21% from 2021.

However, preference for American-made vehicles is the real story of late. Because of the COVID-19 pandemic and the shock to a global supply chain as the economy unevenly returned to normal, 40% of car shoppers say that buying a car built in America is now more important to them, up 22% year over year.