U.S. Latinos contributed $2.8 trillion to the economy in 2020. So why are they underserved by financial services?

When it comes to banking, Mireya Olvera knows that Latino consumers want to feel understood — or, at the very least, like the person on the other end of the interaction respects them.

She’s been in that vulnerable position before. Olvera immigrated to the United States from Mexico 27 years ago and, despite growing up with a father who worked for a financial institution, she remembers how she felt afraid to visit banks, because of both a language barrier and her concerns that she wouldn’t grasp how accounts and loans worked in the U.S.

Today, she’s an area manager at a branch of the Notre Dame Federal Credit Union in South Bend, Ind., where she serves a largely Latino community. And to Olvera, truly providing for that population means offering free financial classes, plenty of patience, and ample bilingual services; though U.S.-born Latinos are overwhelmingly proficient in English, only 37% of Latino immigrants speak English proficiently, according to the Pew Research Center.

Her credit union also offers loans with rates of 12.99% to help cover the immigration fees and legal expenses associated with coming to the U.S., as well as mortgage loans for immigrants who only have an Individual Taxpayer Identification Number, rather than a Social Security number. Without that kind of opportunity, immigrants may face higher rates, she said.

“Once we open the doors for the Hispanic community, and once we give them opportunities, they will always be committed to paying on time,” Olvera said.

The Hispanic population in the United States has grown precipitously in the past several decades to reach at least 62.1 million people, largely owing to immigrants and their descendants. They’re also a critical component of the U.S. labor force, as well as the country’s small-business ecosystem: A 2020 research report from the Stanford Latino Entrepreneurship Initiative found that the number of Latino-owned businesses had increased by 34% over the past decade, compared to 1% for all other small businesses.

What’s more, Latinos had a total economic output of $2.8 trillion in 2020, according to a September report from the Latino Donor Collaborative in partnership with Wells Fargo WFC, +2.84%. That means if they were their own independent nation, they’d have the fifth largest gross domestic product in the world, behind Germany, Japan, China and the United States, the report said.

“Many Latinos are plenty knowledgeable of how the financial system works, one analyst said — they’re just more likely to be discriminated against within it.”

Yet despite being an economic powerhouse in their own right, Latinos remain woefully underserved in the financial realm, advocates say: 9.3% of all Hispanic people in the U.S. were unbanked in 2021 — down from 12.2% in 2019, but still substantially higher than the 2.1% of white people who remain unbanked, according to a survey from the Federal Deposit Insurance Corporation.

There also remains a significant — albeit narrowing — gap between Latino people and white people when it comes to homeownership, as well as disparities in wealth, inheritance, education and income, according to the National Community Reinvestment Coalition.

It’s no surprise, then, that Latinos also are far more likely to report that they’re dissatisfied with banking and financial services when compared to their white peers, according to a December 2021 report from McKinsey & Company.

“We have a financial system that has been structured in such a way that incentivizes some of these inequities that we see, where minority populations don’t have access to the tools that the white majority has had access to, through which they have built their wealth,” said Pablo DeFilippi, the executive vice president of Inclusiv, a network of 500 credit unions that have been certified as community development financial institutions and minority depository institutions.

In an effort to remedy that, the Inclusiv network’s members try to pave a nontraditional path when it comes to banking. Many provide mortgages to people who have an Individual Taxpayer Identification Number instead of a Social Security number, DeFilippi said. Member credit unions also provide credit-builder loans so customers can eventually access other services they might not qualify for otherwise.

Larger banks haven’t really caught up in offering those kinds of services, he said.

“We like to talk about financial inclusion as being not just sustainable, but as a driver of growth for financial institutions, especially small and mid-sized institutions,” DeFilippi said.

Financial technology companies have also been stepping up to create products with Latinos specifically in mind. SUMA Wealth, for example, is a digital platform for young U.S.-born Latinos that Beatriz Acevedo, the company’s co-founder and CEO, worked to create during the pandemic after she saw how the community was struggling economically, all without the sorts of culturally relevant resources that could help them. 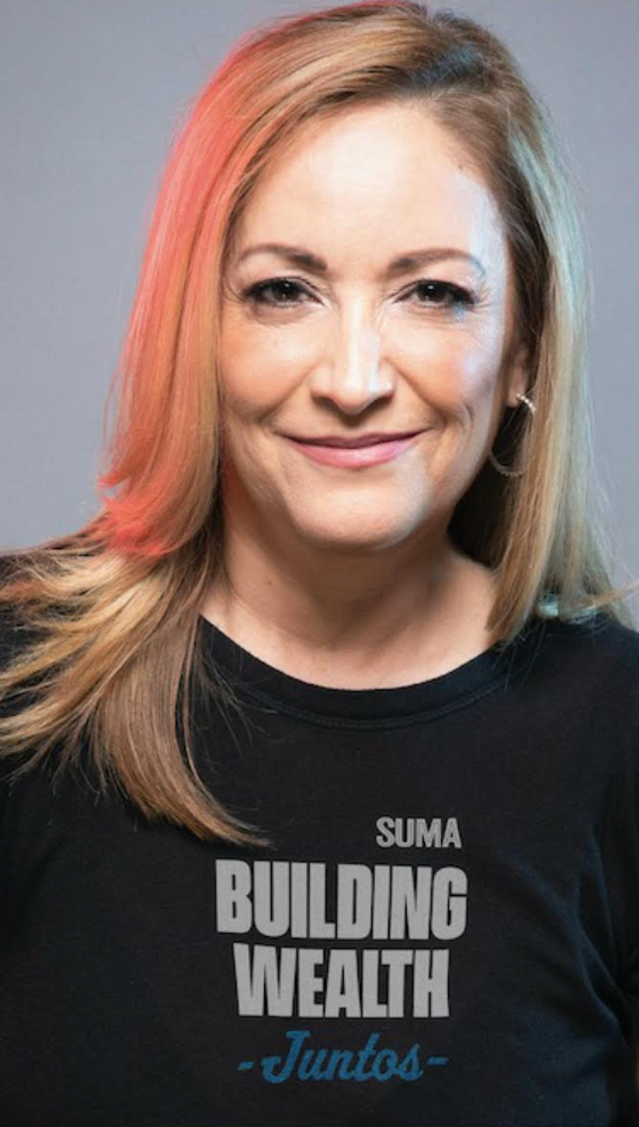 Beatriz Acevedo, the co-founder and CEO of SUMA Wealth.

Now, the platform’s community is 615,000 strong, she said. The company provides free financial education, as well as an app that can provide personalized financial coaching and advice in a way that might feel more accessible to young Latinos. (The basic app, which helps track users’ savings and debt-to-income ratios, among other features, is free, while the personalized aspect that comes with targeted insights and robo-coaching has a subscription fee of $14.99 a month.)

SUMA Wealth is also partnering with employers to provide its premium product as a benefit, she said.

“For me, success means that we really helped move the needle when it comes to closing the wealth gap in our community, and not so much just having a high valuation for my company,” Acevedo said.

The role of industry and government

Still, while there have been valuable conversations around financial literacy and education as a means of bringing more Latino consumers into the fold, those can only go so far, according to Susana Barragán, an economic policy analyst at UnidosUS, a Hispanic civil rights and advocacy organization. Many Latinos are plenty knowledgeable of how the financial system works, Barragán said — they’re just more likely to be discriminated against within it. It will take both industry and government to fix that, she added.

“When we look at credit scores or access to credit in general, Latinos really show a high understanding of how the credit system works,” Barragán said. “Yet they have much lower credit scores than the national average, they’re much more likely to get denied access to credit, and they’re much more likely to be ‘credit invisible,’ meaning that they have absolutely no recorded credit with any of the credit reporting agencies.”

A survey of 1,200 Latinos in Arizona, California and Texas, commissioned by UnidosUS and published last month, showed that 20% of Latinos lacked any credit history, while only 56% had a credit card, compared to a national rate of 84% among adults. When it came to getting extra cash to cover basic living expenses, 32% of Latinos said they primarily relied on loans from friends or family, according to UnidosUS.

Olvera also said that addressing these issues has to go beyond offering basic bilingualism and good customer service: People in the financial-services industry need to be willing to stick with their customers for the long haul, offering compassion and understanding throughout their financial journey. Bilingualism can’t be limited to just bank-teller communications either, Barragán added: A 2017 report from the Consumer Financial Protection Bureau noted that many financial institutions reported only offering written contracts and agreements in English.

At one point in her career, Olvera said, she encountered two credit-union members who were married and had saved for years and years to purchase a house — but all of their savings were in cash, and they had no credit history. They’d also taken Olvera’s financial-literacy classes.

Olvera told the couple they had to establish credit. Two years later, they were able to apply for a mortgage and purchase a home.

“Most of those stories make me feel like we have a purpose here to keep coming to work,” Olvera added.

What to Know About Herschel Walker’s Residency Status in Georgia