An retrofitted Black Hawk helicopter flew autonomously between mountains to deliver blood supplies in a simulated mission. It also picked up a simulated medical casualty

A US military helicopter controlled entirely by a flight computer flew low and fast through a valley while making a 134-kilometre demonstration flight to deliver blood supplies.

A separate test flight showed how the autonomous version of a Black Hawk helicopter could also pick up more than one metric ton of cargo slung beneath its belly and even change flight paths to pick up a mannequin standing in for a wounded soldier. The flight demonstrations took place during an exercise in October.

“It’s a truly autonomous system,” said Igor Cherepinsky at Sikorsky Innovations, the aircraft manufacturer that produces the Black Hawk, at a press conference. “Once you explain what the mission is, you don’t even need a data link – the aircraft makes all the decisions.”

This was the latest milestone in a US Defense Advanced Research Projects Agency program called ALIAS that is testing Sikorsky’s MATRIX technology – a drop-in kit that can convert helicopters into aircraft that fly autonomously. The first shorter flight tests without any humans on board took place in February.

“I think it’s a significant jump from the prior exercises and experiments where there was still a pilot onboard,” says Stacie Pettyjohn at the Center for New American Security, a national security think tank in Washington, D.C. “Eighty miles is a pretty significant distance.” 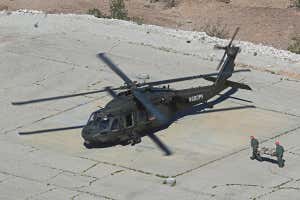 The autonomous helicopter stops to pick up a mannequin

During the recent Army exercise, the flight involved the Black Hawk helicopter carrying 227 kilograms (500 pounds) of both simulated and real blood. The helicopter flew as low as 200 feet above the ground at 185 kilometres per hour (115 miles per hour) between mountains, relying on onboard sensors to avoid crashing into anything. “We are a self-flying car, if you will, so we utilise lidar and cameras,” said Cherepinsky.

A separate flight test started out with the helicopter lifting off with a metric ton of cargo attached to a 12-metre (40-foot) sling and flying toward a designated landing zone. During that flight, Sikorsky showed how a human operator on the ground could use a touchscreen table to command the uncrewed helicopter to drop its sling load and divert to pick up the simulated battlefield casualty.

The autonomous Black Hawks may steer clear of some prior controversies involving autonomous military vehicles armed with weapons. But there is always a risk that such autonomous aircraft, even those without weapons, could cause damage or harm to people on the ground if something goes wrong, says Pettyjohn.

The drone versions of Black Hawks and other military aircraft could potentially perform resupply runs without risking the lives of human pilots. But the MATRIX kit upgrade could also enable aircraft to continue carrying out less dangerous missions on their own while their human crews are resting.

“There is potentially tremendous value in doing these softer missions that are not necessarily at the pointy end of the spear,” says Pettyjohn.