Citigroup has dramatically upped the ante when it comes to luring young bankers in a competitive job market, assigning them to a two-year stint at the Spanish seaside.

The Wall Street bank C, -0.68% has set up a new branch for junior investment bankers in Málaga, the capital of the province of the same name on Spain’s southern Mediterranean coast. Temperatures in the seaside city rarely drop below 38ºF in the winter or exceed 97ºF in the summer.

Citi received more than 3,000 applications from graduates of top universities in Europe, the Middle East and Africa, the Asia-Pacific region and Latin America. The 27 junior analysts chosen represent 22 nationalities and speak 15 different languages, including English, which will be the branch’s main idiom for doing business. After two years, they will be able to apply to work elsewhere within the bank.

Most of the new hires are between the ages of 22 and 26, with the oldest aged 32; the team is 59% male and 41% female. The group will be working to fulfill Citi’s strategy of aligning resources with sectors where it sees key growth: digital disruption, technology, health and wellness, sustainability revolution and energy transition.

“After considering distinct locations in Europe, the Middle East and Africa, it was decided that the new group would be located in Málaga for its recognized capacity to attract and retain talent internationally,” Citi said in a statement. The office is situated in the center of the city, which is one of the oldest in Spain, having been founded by the Phoenicians around 770 B.C.

Citi’s crop of new workers in the Málaga office.

Related: No more New York: People are trying to flee the Empire State for warmer destinations. Here’s why.

Like many Spanish cities, Málaga boasts an efficient public transport system, with a metro, buses and trains.

Manolo Falcó, global co-head of investment banking, told the Financial Times that this was not just a gimmick to draw in young candidates. “We suffer from a lot of churn like the rest of the industry, we lose talent to private equity and tech, so we are eager to understand if we can stop that by offering a better work-life balance,” he said.

A survey of 200 junior bankers by the tech group UpSlide, provided to Financial News last month, revealed that 72% of them were ready to quit over burnout. That comes a year after a group of unhappy Goldman Sachs GS, -1.63% analysts claimed “inhumane” 100-hour workweeks in a PowerPoint presentation. 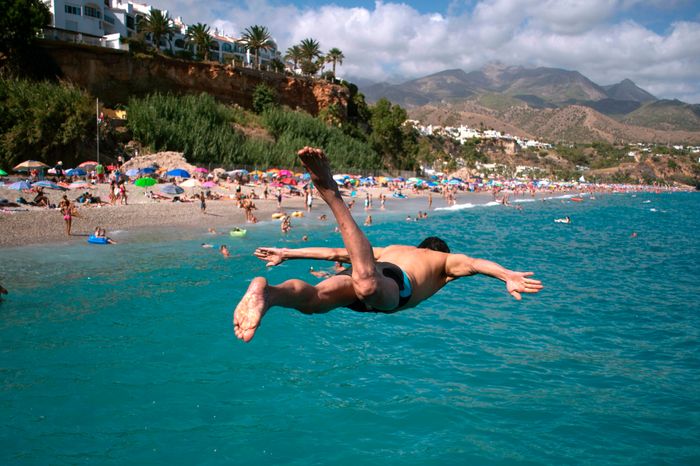 When the working day is over: A beachgoer jumps into the sea from rocks on a beach in Nerja, near Málaga.

Entry-level salaries reportedly have climbed 30% to $110,000 over the past year at many of the bigger firms, with weekend work limited and more vacation time doled out, according to Financial News.

Citi’s Málaga office is one of a series of employee-friendly moves at the bank under CEO Jane Fraser.

Citi is also one of several major Wall Street banks to extend travel benefits to employees seeking abortions in other states in the wake of the U.S. Supreme Court’s decision in June 2022 to strike down Roe v. Wade, ending the constitutional right to abortion.

Despite the moves to encourage investment bankers, talk of layoffs at Goldman Sachs Group Inc. GS, -1.63% and other banks has increased after a sharp drop in deal making.

From the archives (July 2022): The sum also rises: Hemingway enthusiasts and other tourists in Spain encounter an inflation rate significantly higher than the U.S.’s