The fiery redhead accused of randomly shoving a respected, 87-year-old vocal coach to her death in Chelsea is the scion of a cesspool dynasty and was a gal-about-town in New York City before she was charged with the brutal crime.

Lauren Pazienza, 26, grew up in an idyllic part of Long Island, where her dad Daniel runs a successful business in Holtsville that has previously been ranked the No. 1 cesspool company in Suffolk County for service and price.

Once she moved to the Big Apple, Pazienza, a former events coordinator for a high-end French furniture company, was seen gallivanting around town, attending swanky parties and art gallery openings.

But neighbors at the upscale Astoria condo where she lives with her fiancé said she wasn’t all smiles at home.

Law enforcement sources say that Pazienza was a known nuisance in the Shore Towers, and had previously called the cops on her neighbors.

“I felt horrible about the situation but I wasn’t surprised,” one woman who lives in the doorman building told The Post Wednesday.

“There was always an issue with her and someone in the building,” the neighbor continued. “It’s like always something with that lady. I feel for her fiancé because he’s a nice guy and he didn’t sign up for this.”

A man who lives in the building described her as “definitely not the best tenant.” 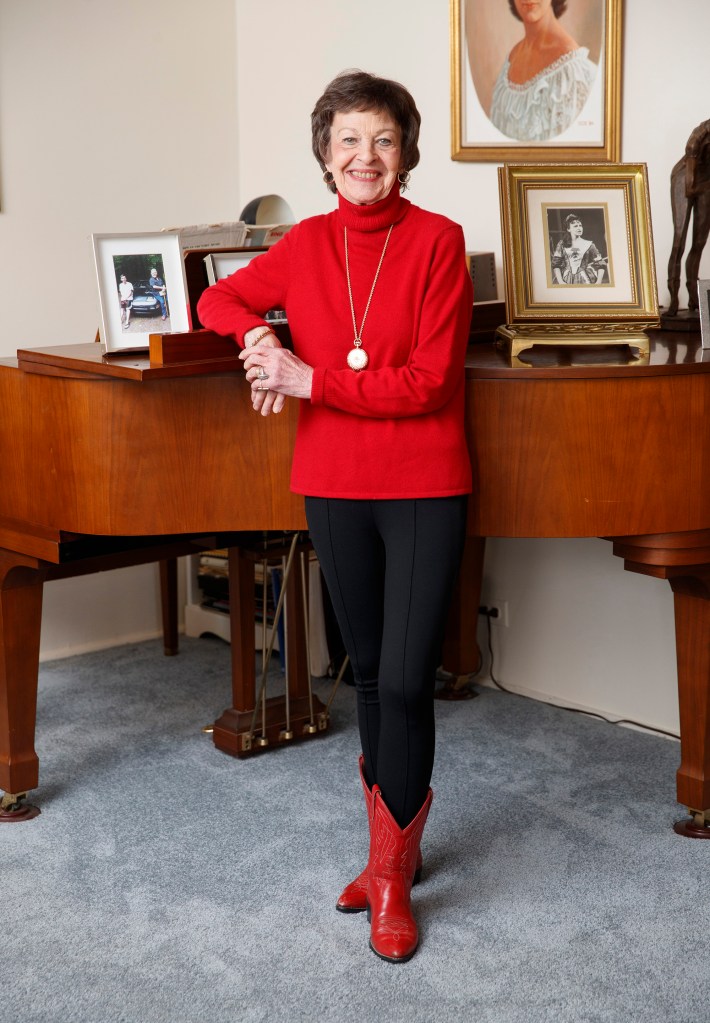 “There’s always some type of issue, some type of complaint. You’ll always know it’s her. It’s ridiculous,” he said.

One neighbor said Pazienza had been confrontational in the past — but never violent.

“It was verbal. Sometimes she would stand up for herself, definitely,” said the woman, who said Pazienza argued with the building management about issues like parking tickets.

“She will not put up with nonsense … she will say, ‘What is your problem?’ ‘What do you want from me?’”

Her apparent short-tempered nature could have started back in grade school.

A former classmate told Fox News on Wednesday that Pazienza bullied him after he moved a few doors down from her in the second grade — and it got so bad that a teacher had to separate their seats in the classroom.

The accused shover “always had a crazy look in her eyes,” the anonymous classmate said, claiming that she would kick him and call other students names.

Pazienza was sent to Riker’s Island Tuesday after a judge set her bail at $500,000 cash, $1 million bond on manslaughter and assault charges in the death of beloved former Broadway voice coach Barbara Maier Gustern. 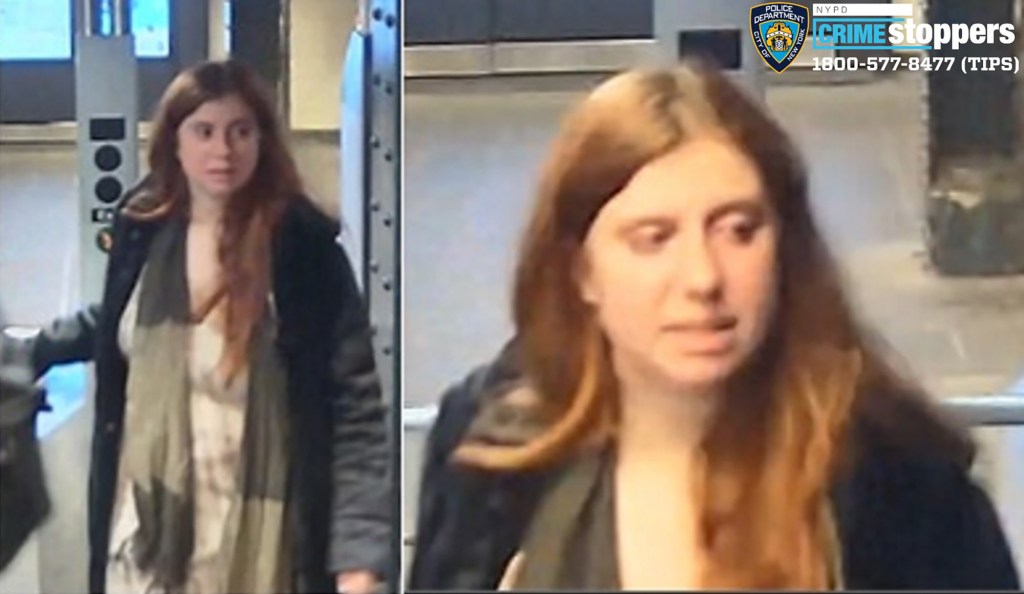 Surveillance footage believed to be Pazienza showed the Long Island woman in the subway station at the time of Barbara Maier Gustern’s death.

The Post attempted to visit Pazienza at the lockup on Wednesday, but she refused to speak, looking drawn in a gray jumpsuit, her long red hair slightly disheveled.

Prosecutors allege Pazienza crossed West 28th Street at around 8:30 p.m. on March 10 and called Gustern a “bitch” — before pushing her to the pavement for no apparent reason.

It’s unclear why Pazienza, who hasn’t had previous run-ins with the law, allegedly attacked the elderly woman.

In a mugshot obtained by The Post on Wednesday, Pazienza can be seen grimacing, her eyes puffy and red.

Her parents and her 24-year-old brother are supporting her, according to defense attorney Arthur Aidala — who said the family would spring her from jail as soon as they can get the bail package together. 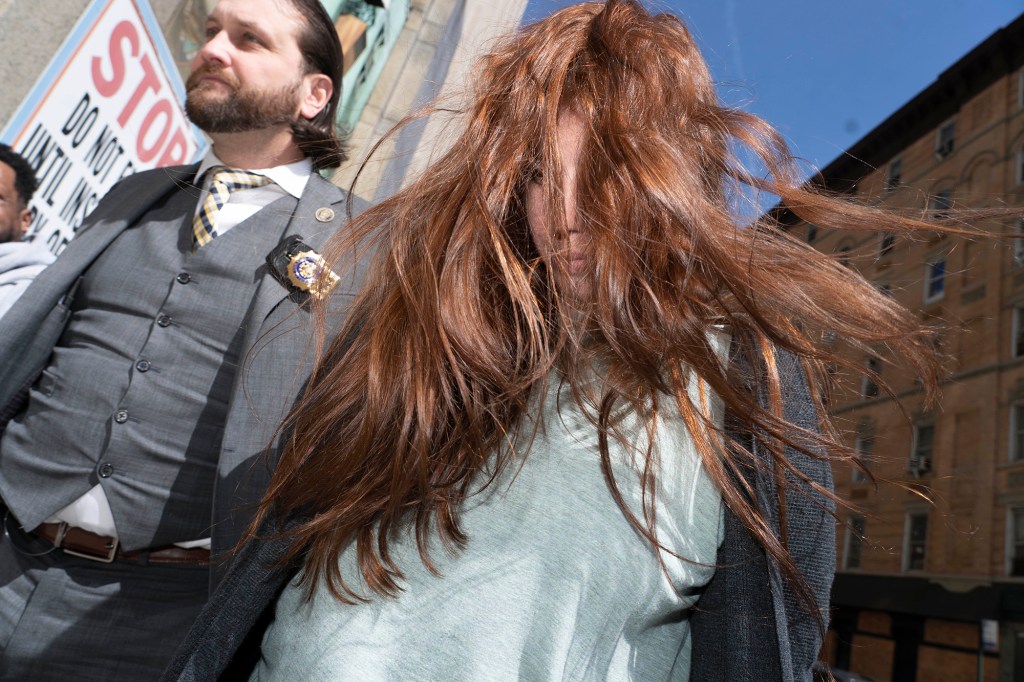 Lauren Pazienza is escorted into central booking after turning herself in to the NYPD.Steven Hirsch

“We are pleased that the Court granted bail to Ms. Pazienza and we expect her to be released in the coming days,” Aidala said in a statement Wednesday. “The Pazienza family joins the rest of the City in grieving the loss of Barbara Gustern.”

Pazienza’s parents — who were in Manhattan Criminal Court for her arraignment on Tuesday — have not commented on her arrest. A man was spotted inside their Port Jefferson home on Wednesday, but did not answer the door.

Daniel Pazienza, a Long Island native, runs a well-rated cesspool company that’s been around for “over 3 generations,” according to its website. A man who identified himself as the office manager there said Daniel wasn’t in on Wednesday before hanging up the phone.

Daniel and his wife Caroline Pazienza frequently traveled, vacationing in Aruba, Paris, France and at a 4-star hotel in Key Largo, Florida over the years, according to photos on Facebook.

The couple appear to have raised their daughter in Setauket, near Port Jefferson, where she attended Ward Melville High School with her future fiancé, Naveen Pereira, now a Microsoft customer service specialist, who hung up when a Post reporter called him Wednesday.

After graduating in 2013, Pazienza went to the Fashion Institute of Technology, earning a bachelor’s degree in direct and interactive marketing.

She worked various marketing gigs, most recently for upscale French furniture firm Roche Bobois. But she quit in December, apparently after she realized she hit her “ceiling” there, according to her lawyer.

Once she moved to the city, Pazienza jaunted around to events and parties. One photo shows her attending the 40th-anniversary party for New York society magazine “Avenue” in 2015.

Pictures on the website Guest of a Guest, which covers “people and celebrities at exclusive events” also show her attending exhibitions and art openings with friends. 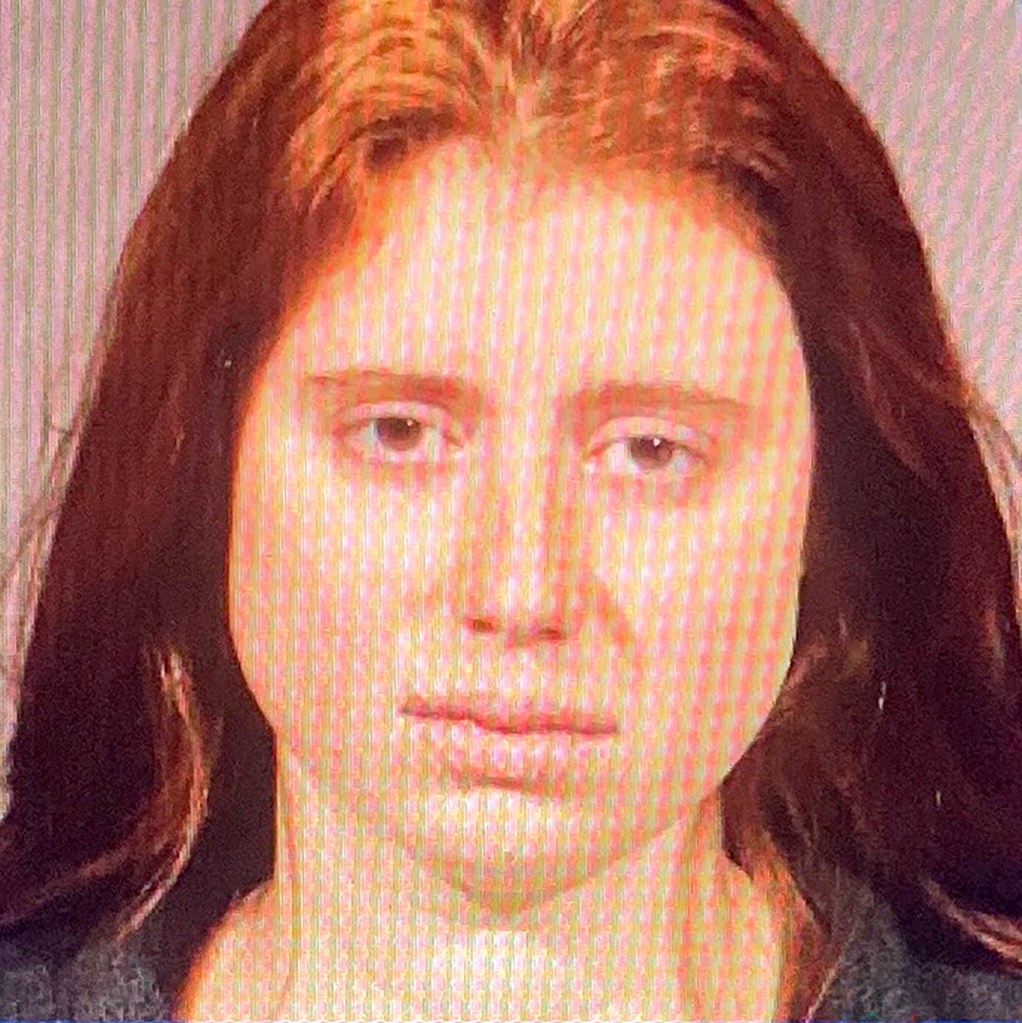 Lauren Pazienza is a Long Island native and socialite.

In one shot from 2015, Pazienza smiles widely, her arm flung around the shoulders of a man, in front of a painting at Joseph Gross Gallery.

The now-temporarily-closed gallery is just a few avenues from the scene of the heartless attack on Gustern.

Prosecutors say that just seven minutes after the cold-blooded shove, Pazienza was spotted having a “physical altercation” with her fiancé — and then stood watching as ambulances rushed to the aid of the victim on West 28th Street near Eighth Avenue.

The couple, set to be married in June, were then seen taking the subway back to their one-bedroom apartment in Astoria, that he and his dad appear to have purchased in 2019. 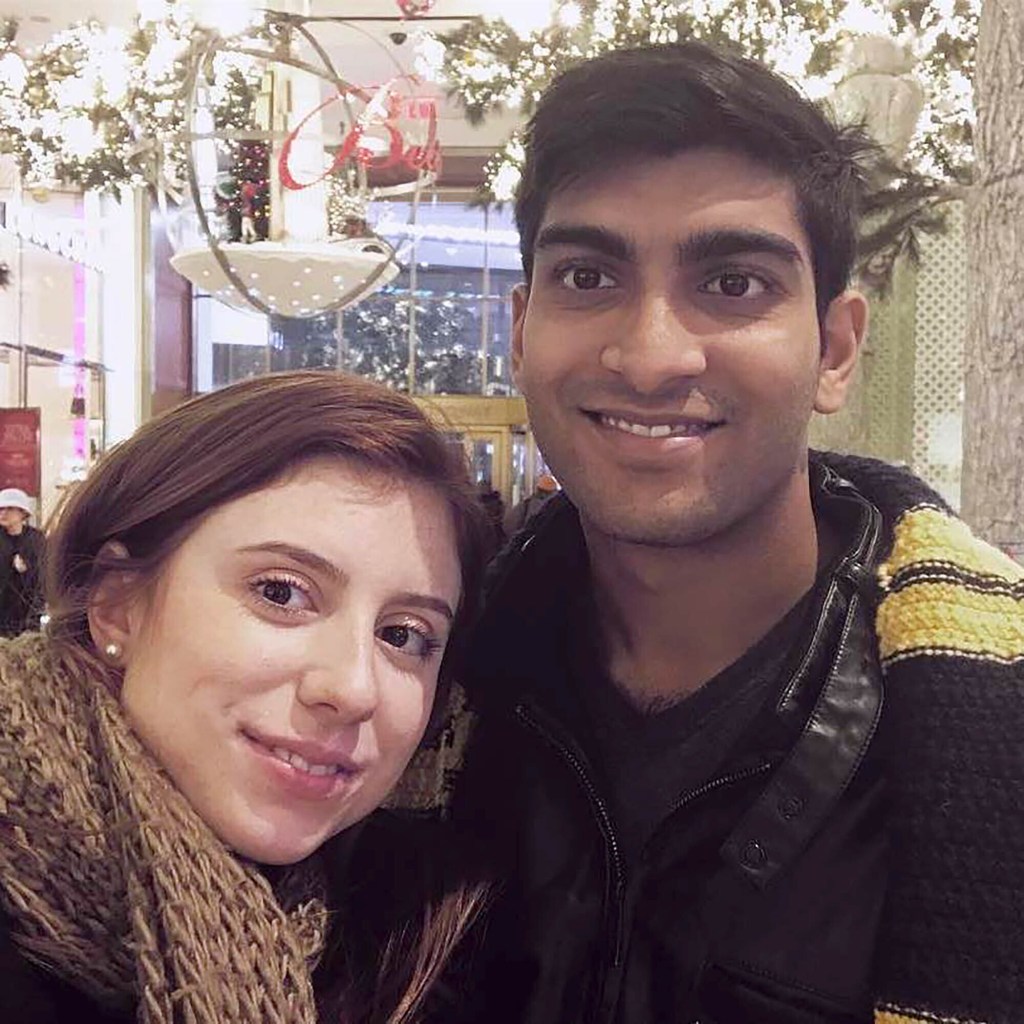 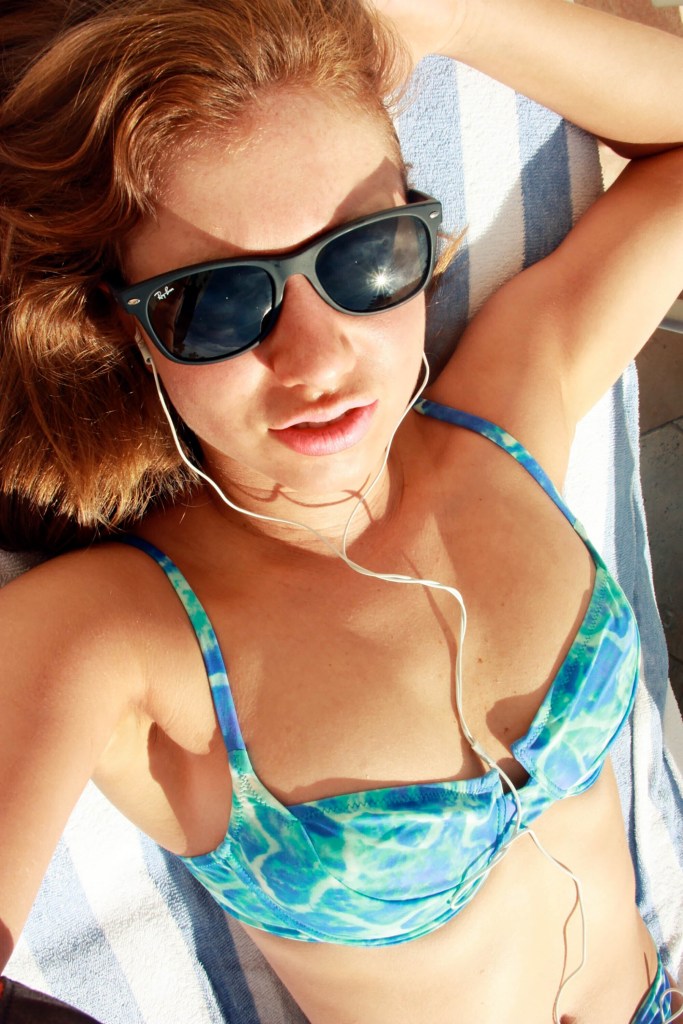 Law enforcement sources say that Pazienza was a known nuisance in the Shore Towers.Lauren Pazienza/Tumblr

Pazienza later fled to her parents’ house, and the next day “completely stopped using her cellphone,” stashing it at the home of her aunt, Assistant District Attorney Justin McNabney said in court Tuesday.

She took “every effort to avoid apprehension” — including deleting her wedding website and taking down all her social media, the prosecutor said.

On Monday, detectives showed up at the home, but Pazienza’s dad claimed his daughter wasn’t there, prosecutors allege.

Her attorney then contacted police and Pazienza turned herself in on Tuesday, keeping mum as she was led into court, her flowing, red hair covering her face.

How Do You Get Health Care in Prison?

Bionic Fish May One Day Gobble Up Ocean Microplastics